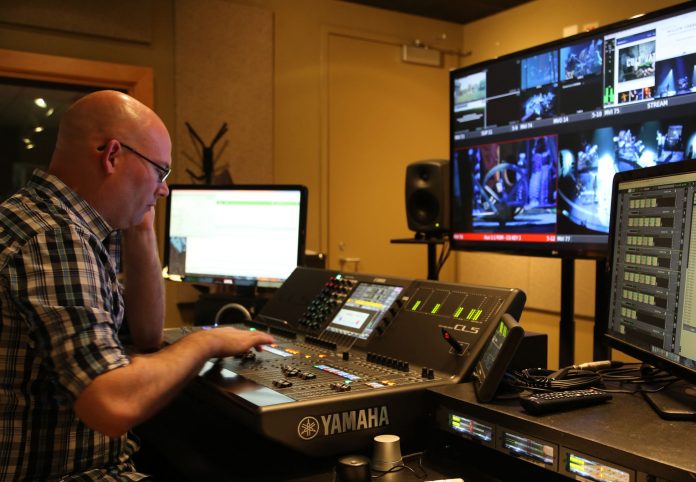 Willow Creek Community Church is among the largest worship facilities in the U.S., serving a weekly congregation of 26,000 in the Chicagoland area. The church’s 800,000 sq ft main campus, located in South Barrington, Illinois, recently underwent a major upgrade to its AV systems, including Yamaha FOH, monitor and broadcast consoles, a robust Dante network infrastructure, Cisco network switches, Meyer Sound MILO and M2D systems and much more. Helping to distribute the audio between each location is a number of RedNet Dante-networked audio interfaces from Focusrite.

As with many modern churches, AV production takes a central role in worship, including video screens and closed-circuit feeds, broadcast and streaming and more. Matt Wentz, who has been with the church for the past 11 years and for the past six the Audio Systems Engineer, notes, “Our whole production team is as many as 30 people total and they’re all broken up into three smaller crews. We updated our video systems last year and it was important we upgrade the audio to keep up. Dante was clearly the right solution as far as networking such a big campus and we were running into some conversion issues here and there. After doing extensive research, I acquired a RedNet 6 interface and the rest sort of came together piece by piece.”

Wentz adds, “We have three huge services each week that are held in our 7200-seat auditorium, one on Saturday and two on Sunday as well as visiting artists and a massive annual conference, the Global Leadership Summit, which gets broadcast and re-broadcast to literally hundreds of thousands of people around the world. We’ve been able to put this system to work for all of it and it’s performed flawlessly. Even if I ever do have a problem, Focusrite’s product support is extremely helpful and professional. Before this system was put in place, we had copper wiring infrastructure but the constant ground hum drove me crazy. Yet, with the Dante network in place and Focusrite interfaces, we know the sound will be completely clean. So the workflow and the ability to just get clean audio from one point to another with the RedNet units is one of the huge benefits of why we went with RedNet and Dante and the whole audio networking. There’s not a lot of room for error in what we do and RedNet adds an extra level of reliability. It’s enhanced and streamlined our workflow to a massive degree.”