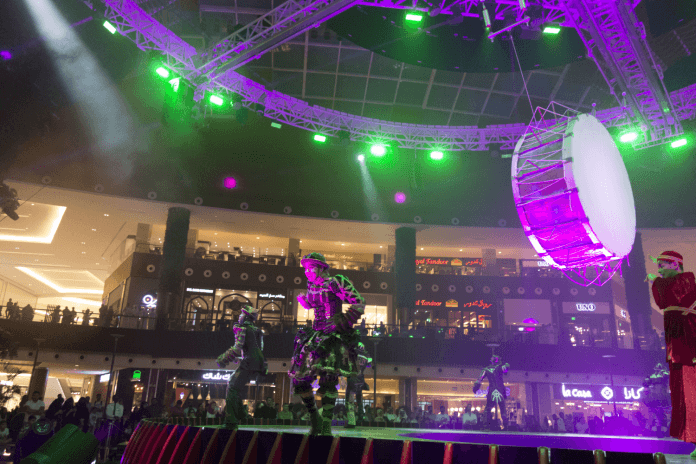 The Mall of Qatar is a shopping centre that opened in December 2016 in Doha, Qatar. The mall, which is the equivalent size of 50 football pitches with over 500 stores is the nation’s largest mall. It also features mall-wide live entertainment with a professional live theatre and 360° acts and shows performed on a multi-lift rotating stage.

Stephen explained his product of choice as one that must be both, “Reliable and manageable and MA Lighting clearly matched our requirements. Especially because the video content is integrated into the lighting show file which makes the work a lot easier for the operator. Additionally, MA was chosen because of its overall networking and control features.”

“The so called ‘main shows’ are a mixture of dance, live artist and music all of which are programmed in our LichtUnit studio with the use of a grandMA2 light, an MA VPU and an MA NPU. The shows are time coded and each last between 35 and 45 minutes. As detailed preparation was needed on site we only had to make small amendments. The biggest challenge was that the show takes place on a 360° stage with audience positions on three different levels. The task was to ensure that each audience member were subjected to the same AV experience as well as each actor/artist’s visibility clearly seen from every seat, making this is a demanding exercise when setting the lights in particular.”

“All in all, the lighting design is based on a multifunctional setup that can light every scenario that might happen on the stage. So we had to deal with musical performance, theatrical production, the genres of music and dance as well as kids shows and the requirements of TV!” concluded Stephen.