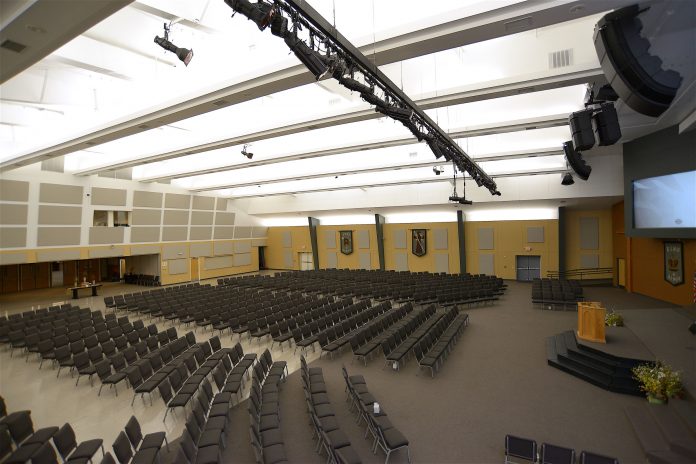 No one can ever accuse the Maranatha Church of Forest Lake, Minnesota, of being shy or timid in its worship style. Pastor Bob Headley will be the first to acknowledge that the sound inside the 1,000-plus seat sanctuary can get both enthusiastic and loud. “It’s a full-on rock band, and it can get intense,” he says. Until recently, the church’s existing sound system could not keep up anymore and it was taking more and more volume to fill the church, while reverberation off of the walls and floor was diminishing speech intelligibility. It was clearly time for a refresh and Pastor Headley and a six-person committee evaluated the possibilities for a new sound system. Three regional companies came and made pitches with three different sound systems. One was clearly the right choice: a RoomMatch system from Bose Professional brought in by EMI Audio of Minneapolis.

EMI Audio designed a system composed of four RoomMatch enclosures in each of two left-right hangs. These flank a central cluster of four Bose RMS215 dual-15-inch subwoofers. Two additional RoomMatch speakers serve as fill speakers at the far ends of the stage. In addition, three RMU208 utility speakers were installed as delay speakers for the entryway to the Sanctuary. Fifteen Bose DS100F FreeSpace ceiling loudspeakers are employed for a separate distributed lobby sound system. These are all powered by six Bose PM8500 PowerMatch amplifiers.

“We liked the RoomMatch system as soon as we heard it,” says Bob. “In fact, we actually liked it even more once we heard the philosophy behind it, the idea that the speakers are made to cover exactly what’s necessary in the room, keeping the sound on the audience and off the walls. RoomMatch was a new paradigm about sound for us and we liked it.” Bob says the same about the PowerMatch amplifier’s 4-quadrant operation of which allows the power supply to instantaneously source and sink energy from either supply rail and returns normally wasted energy from the loudspeaker and amplifier back into the power supply. “Its conservation of energy is very appealing,” he says.

The RoomMatch system also offers tremendous flexibility. When it became apparent that the hang positions of the system could interfere with the church’s projection screens, the design was able to be adjusted physically, placing the subs in the centre, with the appropriate changes in RoomMatch units to continue to provide exact and precise pattern coverage of the room. “The RoomMatch system gives us a lot of flexibility to cover any kind of room,” says Jeff Geisler, Sales/Design with EMI Audio. “Maranatha Church has a large and unusually shaped room, plus they have a loud worship style, but RoomMatch has exactly the coverage patterns we need on each side of the room. It keeps the energy off the walls and other reflective surfaces and really improves the speech intelligibility and the sound of the music.”

Pastor Headley agrees, noting that since the Bose Professional RoomMatch system has been installed the average volume in the sanctuary has gone down to a more manageable level with the room sound fuller than ever. “We have really remarkable clarity to the sound now,” he says. “The speakers are doing what they’re supposed to be doing, and they’re taking us to the next level.,” Bob concludes.