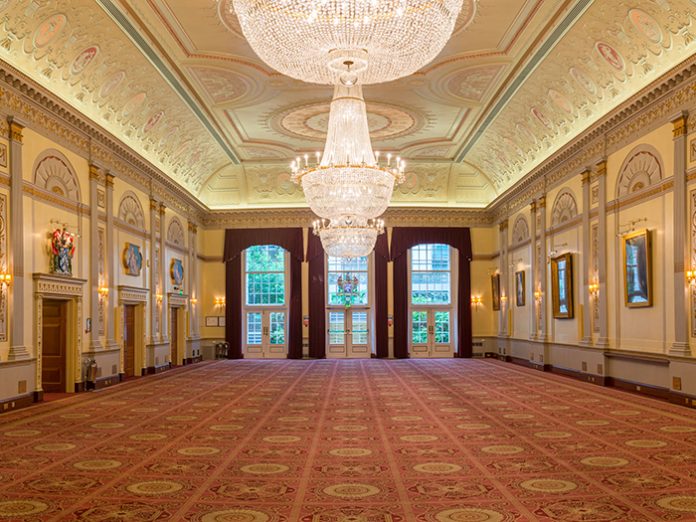 The Plaisterers’ Hall is the largest and one of the finest Livery Halls in London. Opened in 1972 and situated in the heart of the City of London at One London Wall, it reflects the grandeur of a bygone era but in an ultra-modern setting. The décor is neo-classical in style, with designs created by Robert Adam in the 18th century faithfully reproduced in great detail both on plaster and wood.

Recently, the Great Hall underwent a facilities upgrade, including replacement of the sound system and the addition of touch screen control. Bose Pro Partner, Whitwam, which installed the original system back in 2004 when a major renovation took place, were asked to look at upgrading the sound to a high quality speech and recorded music system to be used for various different functions including formal dining, corporate events, parties and wedding receptions. In addition to an obvious requirement for excellent sound coverage, Whitwam were asked to consider the aesthetics of the hall when selecting the loudspeakers.

Following a client demonstration by Whitwam involving three different loudspeakers, the Plaisterers’ Hall management team selected Bose line array loudspeakers. The result is a system comprising eight Bose Panaray MA12 speakers, with bass support from two Bose Panaray MB12s, powered by Bose PowerMatch 8500N and PowerMatch 4500N amplifiers. The MA12 loudspeakers were selected for their narrow vertical dispersion which is perfect for the hall acoustics and ceiling height, and the loudspeakers are painted to match the surrounding wall colour so as to blend into the architecture of the hall.

Both sound and lighting are controlled by a Crestron system either via a wired touch screen or wirelessly via an iPad, and microphone points are installed throughout the hall, enabling the room layout to be changed for different events. The volume level of each loudspeaker channel can be dipped to reduce feedback from nearby microphones.

According to Plaisterers’ Hall Manager, Robert Pegg “During a demonstration from Whitwam with a selection of sound equipment, the loudspeakers from Bose stood out above the rest and the Senior Management at Plaisterers’ Hall made a unanimous decision. With Bose and Whitwham’s ability to integrate the colour of the speakers into the décor of the venue, people now truly find it difficult to hear where the sound is coming from. An excellent and dynamic upgrade from Whitwam, and a valuable addition to the venue’s technical features.”