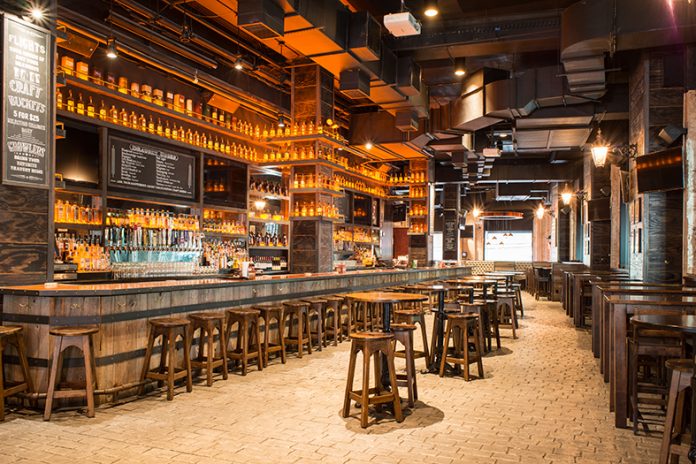 Manhattan’s Financial District is the stuff of legends, with literally millions of people populating its towering corridors every day. In this teeming metropolis, great restaurants and watering holes are an essential part of life. Such is the story of Stout FiDi. Opened as a counterpart to its uptown predecessor, in just over a year it’s become a success story of its own, offering an intimate yet lively environment and great sound, thanks to a well-planned Renkus-Heinz audio system.

Like many bars and restaurants in lower New York, Stout FiDi is built into a long, rectangular space. Unlike most, Stout boasts an expansively deep space and towering 20+ ft ceilings, creating an impressive, spacious atmosphere. As John Paturno, President of Rego Park, NY-based Starview Audio explaied, it’s a space with its share of challenges.

“There’s a lot of glass and other reflective surfaces in there as well,” John reported. “The previous venue in there had been something of a cacophonous space, and part of our agreement with the owners was a commitment to some acoustic treatment. That helped take the edge off.”

Stout’s main room is dominated by a massive bar that stretches the length of the space, replete with ornate mirror-backed shelves of exotic whiskies climbing nearly to its 20 ftceilings. The area is covered by four Renkus-Heinz TRX82 dual eight-inch systems. As Richard Trombitas of Cardone, Solomon Associates observes, the architecture informed the choice of loudspeakers.

“The shelves behind the main bar area dictated that the loudspeakers be hung relatively high, which would impact coverage,” said Richard. “We recommended the TRX82 for that area because of its exceptionally tight pattern control over a longer throw. The conic horn provides a nice 60° vertical pattern that doesn’t create a lot of excess sound to excite the mirrors and other reflective surfaces.”

The remainder of the bar area is served by a dozen TRX81 systems, providing balanced, even coverage to every seat. Powersoft amplification drives the system, with Symetrix Radius DSP enabling the system to be controlled via iPhone.

“The TRX81 and TRX82 were a great choice for the new Stout FiDi location,” John concluded. “The system provides great musical performance, as well as exceptional vocal intelligibility. Guests can sit comfortably at the bar and hear every word of a song, yet still carry on a conversation without yelling in each others’ ear. The system sounds fantastic.”