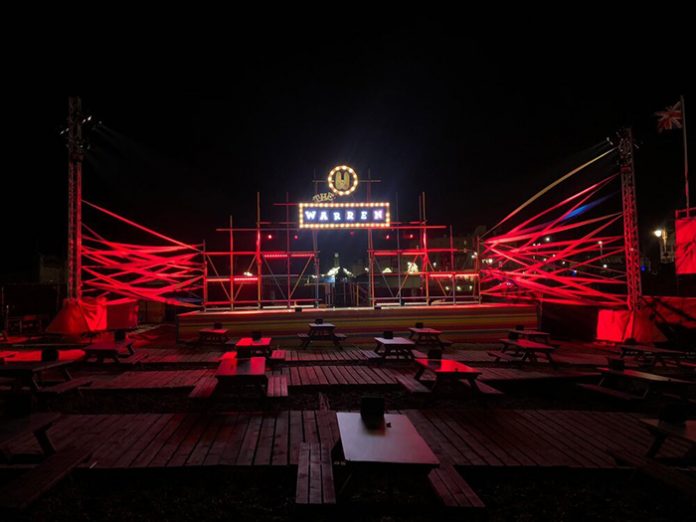 Taking place on a purpose-built site on the beach next to Brighton Pier, The Warren Outdoor Season opened earlier this month, offering a range of live comedy, theatre, cabaret and family shows. Having supported the Brighton Fringe at The Warren for over five years, White Light was called upon to supply the lighting, rigging and power equipment for this brand-new season, which is one of the first to open following the outbreak of Covid-19.

The Warren is a pop-up, multi-purpose site which consists of four venue spaces and four bar areas. Annually, it hosts the Brighton Fringe which is one of the largest fringe festivals in the world. Unfortunately, as with so many other live performances, the outbreak of Covid-19 saw the cancellation of this year’s festival. As such, Otherplace Productions, the team who run The Warren, decided to look for an alternative, safe way to put on live entertainment.

Joshua Carr, Technical Director at Otherplace Productions, commented: “We were all incredibly disappointed when we had to cancel the festival back in March. Not only was it a blow for the city in terms of culture but also the economy, as it employed over 250 people. That said, we knew that it was in the public’s interest and we had to abide with government guidelines. It soon dawned on us though that social distancing wasn’t going away anytime soon and, as such, decided to look at ways in which performances could happen with this in place. We knew this would need to be outside and, after speaking to the local authority, put together an outdoor concept which would be situated next to our main permanent venue”.

The design Josh and his team put together is a completely safe, socially-distant performance space. The concept is an open-air theatre space, with picnic benches spaced out which adhere to government regulations. The space is used for the various performances, who are either solo acts or in shows with people from the same household, and cover a range of disciplines. On arrival, audience members are shown to their spots and will be able to remotely order drinks and snacks, which will be brought to their table in order to minimise contact. Each table will be deep-cleaned between sessions to keep everyone safe.

Josh was once again in charge of the technical design yet, unlike the usual Fringe, had to work within the extremely restricted physical, budgetary and technical limitations. He explained: “Once the plans were approved, we literally had seven days from load in to opening the season. So safe to say it’s been a case of all hands on deck! In terms of the technical set-up, I knew that the lighting rig would need to be flexible, simple-to-use and easily installed.

I immediately contacted WL and worked with their Customer Service team who were just brilliant in helping me source exactly what I needed in terms of lighting fixtures, power distribution and scaffolding. Their experience was pivotal in helping us bring the entire set-up to life and they fully embraced our attitude of the show must go on”.

Alongside fulfilling the need for live performance, the season is also serving an equally important purpose within the local community. Visiting companies are being allowed to programme their shows inside the space, taking all of the box office sales. Similarly, the majority of staff are those who would normally have been working at the Fringes in Edinburgh and Adelaide; both of which were cancelled.

Josh commented: “This is a recovery project. It’s a way of us trying to get back to some semblance of normality and returning to what we all love doing. We wanted to put something on this year, not just for the performers but the wider supply chain who rely on seasons like this to survive. The response so far has been amazing and we’re really looking forward to the next eight weeks”.

The Warren’s Outdoor Season is now open and will run until 27th September 2020. For more information about the festival and the programme of work, click here.

Josh concluded: “Ultimately, we wanted to recreate the atmosphere that makes The Warren a perennial Fringe favourite in a new, Covid-safe outdoor site. In the midst of an incredibly tough time for the arts industry, we are delighted to be able to offer an alternative platform for the city’s renowned live performance community. We are also grateful to the team at WL for their hard work and efforts in helping us make this a reality”.