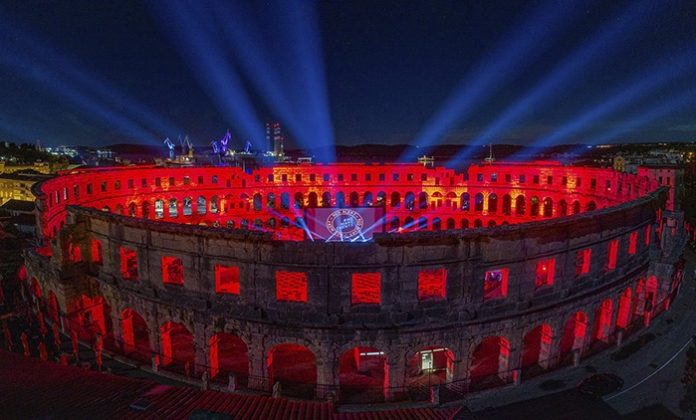 Robe moving lights were at the core of a truly spectacular lighting scheme designed to illuminate the magnificent Pula Arena in Croatia in red for the evening of 1 September.

This was in solidarity with the #RedAlertRESTART action in the USA which saw over 2,000 buildings lit in red all over North America on the same date, to highlight the critical stage of the live events and entertainment industry globally during the COVID-19 pandemic and the need for support and roadmap to re-starting.

Pula’s world-famous arena is the only remaining Roman amphitheatre in the world to have four side towers and all three Roman architectural orders – Doric, Ionic and Corinthian – intact! It was constructed between 27 BCE and 68AD, is among the largest six surviving Roman arenas worldwide and is also the best-preserved ancient monument in Croatia.

The 12 MegaPointes were positioned on the stage floor with the six MMX WashBeams rigged above a projection screen, all focussed on washing the Arena’s internal walls. Six of the BMFL Spots were rigged on top of the columns above the auditorium, with six on the ground below, and all the lights were programmed and controlled by a ChamSys MQ500 Stadium console.

“The event industry has been unable to work for the last 6 months and needs an urgent roadmap to restarting so event companies have a fighting chance to survive,” stated Davor Vujić, LAV Studio Managing Director. “If that doesn’t happen soon, many companies will go bankrupt. We are convinced there is a good chance of support because we are letting politicians and the public know we exist and that our jobs and lives are on the line!”

Davor concluded: “We look forward to a time – hopefully soon – when the situation is resolved, and everybody can return to the work / lifestyle they love with plenty of energy and enthusiasm to meet new challenges ahead.”