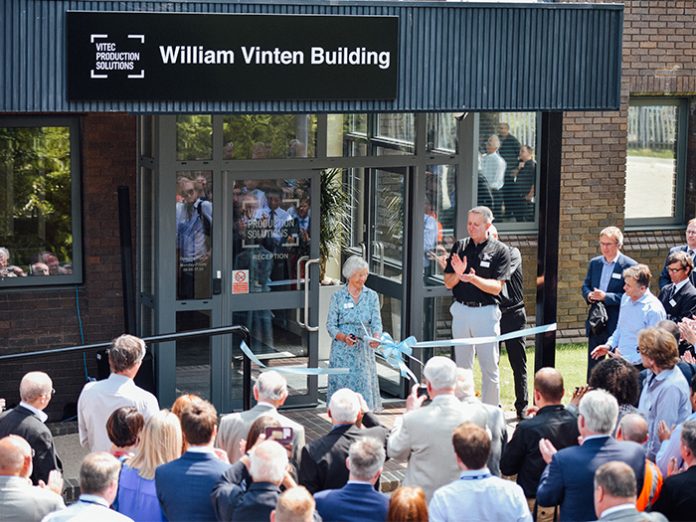 The Vitec Group’s Production Solutions Division celebrates the opening of a new facility in Bury St Edmunds, UK. CEO, Stephen Bird, invited guests to an opening ceremony at the new site to commemorate the company’s heritage, including its industry-leading technologies, brands and relationship with the Bury St Edmunds’ community.

The 66,000-square-foot headquarter is the latest achievement in Vitec’s ongoing investment in Bury St Edmunds and in British engineering and manufacturing. Employing close to 200 people, the new facility is the design home of the company’s teleprompting and broadcast camera support brands, including Autocue, Autoscript, OConnor, Sachtler and Vinten. The factory includes an advanced carbon-fibre cell for the manufacture of the award-winning camera tripod, flowtech.

“After a 54-year presence in Bury St Edmunds, the investment in this new purpose-built site reflects the success of our premium brands in the global marketplace,” said Stephen Bird. “We’re very proud of the outstanding accomplishments of our people and our products, and the industry leadership they have built in key areas of the broadcast market.”

In 1910, William Vinten founded a company to manufacture projection machines for Kinemacolor, the world’s first successful colour motion picture process. Over the ensuing decades, W. Vinten Ltd. would go on to invent and commercialise ground-breaking cameras and, later, camera supports, cranes, dollies and pan-tilt camera heads. Early on, the BBC standardised on Vinten equipment, a partnership that remains strong today. The company relocated to Bury St Edmunds in the mid-1960s and later changed its name to The Vitec Group. The Vinten name lives on as a leading manufacturer of manual and robotic camera support systems and accessories.

At the official opening celebration includes company and community representatives such as Elaine Vinten, the wife of Bill Vinten (son of founder William Vinten), members of Vitec’s Board of Directors and leadership team, Bury St Edmunds community figures, contracting companies for the new facility’s design and construction; and current and former staff members.