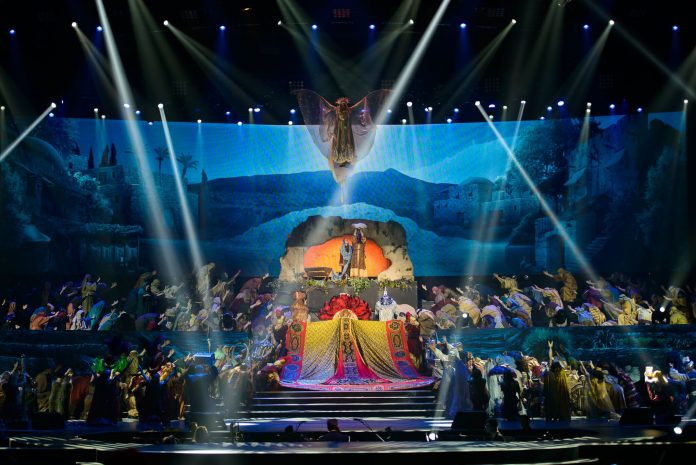 The production featured Santa and his workshop in Act One, a choral interlude in Act Two and a living nativity in Act Three.  This season new music and a new script opened the show; two-thirds of the lighting cues occurred in Act One and five days were devoted to programming them.

“In the past we’ve had 10 or 12 dedicated follow spots to cover people flying and various audience activities,” says UVLD Lighting Designer Matt Webb. “We discovered a new follow spot system and decided to give it a shot. It allowed us to utilize moving lights as follow spots.”

“We could designate four Scenius Profiles as our follow spots,” says Webb.  “That allowed us to eliminate a bunch of seat-kills that tied up floor space with dedicated follow spots.  And we could position the Scenius fixtures exactly where we wanted them – we weren’t stuck with any fixed points.  If we needed two fixtures on one person we could assign that; we could configure them as needed.”

“Scenius blew everything else out of the water,” noted David Seitz, Associate Lighting Designer and Programmer with UVLD.  “It had fantastic optics, was incredibly bright and looked fantastic.  It was great to be able to utilize them as the primary follow spots on the show.”

Webb enjoyed “getting the full color mixing of Scenius in a follow spot.  We used some texture, too.  We got all the advantages of a moving light in a follow spot, which was a fun new experience for me as a lighting designer.”

He also tapped 50 Mythos2 fixtures for the show mounting 36 overhead and placing 14 on the floor for lighting effects and graphic motion. “It was fun to see how all the tools worked together on the production,” says Webb. “Gemini Stage Lighting facilitated the use of Scenius, and Production Electrician Nick Deel played a huge role in making it all happen.”

Greg Norgeot was UVLD’s Technical Director. James Maddux was the Lighting Designer for Prestonwood Baptist Church. Claypaky is  exclusively distributed in North America by ACT Lighting, Inc. Francesco Romagnoli, Claypaky Area Manager for North and Latin America, added, “This was a fantastic use of our lights and we love working with UVLD on these exciting and interesting projects!”