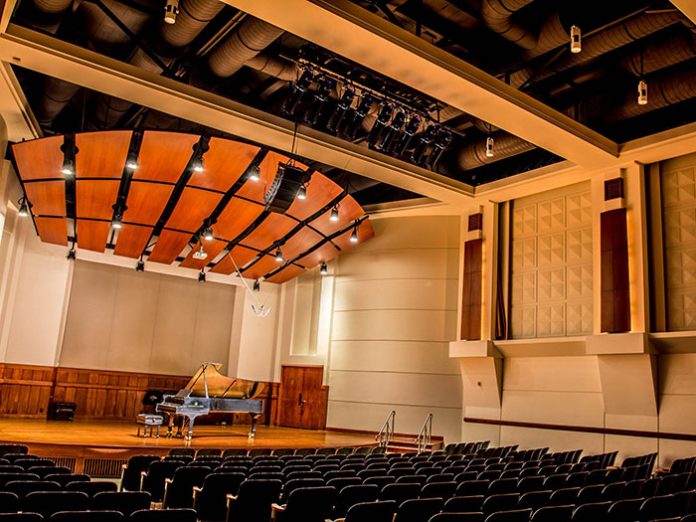 Acclaimed film director Nick Redman once said of composer Alfred Newman: “He was a true musical force, and one that cannot in any sense be replaced.” It was only fitting then that the University of Southern California named its acoustical gem of a recital hall after this film scoring icon, who won nine Academy Awards and was nominated 45 times, behind only Walt Disney and John Williams.

However, while the Alfred Newman Recital Hall on the USC campus has been earning international recognition for the purity of its acoustics, the 280-seat facility’s incandescent lighting system has been ageing. That is, until 4Wall Entertainment replaced it with an all-LED system that featured house lighting from Chauvet Professional’s Ovation H-105WW LED Fixtures.

“The university wanted to retrofit this hall with an LED solution to save energy and save on the lamp changes,” said Rafael Garcia, Senior Account Executive at 4Wall. “Before we installed the new system, the school would have to erect a scaffolding system to change out the house lamps and a man lift to replace the tungsten par lamps onstage. It was time consuming and expensive.”

A preferred dealer for USC that enjoys a strong relationship with the university, 4Wall installed 15 of the Ovation H-105WW LED Fixtures. The fixtures were positioned in three straight rows of five units each in the black spaces between the three prominent white mason beams that run across the width of the audience area ceiling.

The COB LEDs of the Ovation fixtures deliver a bright, even warm white light that not only illuminates, but also complements the intimate feel of the hall’s architecture. Convection cooled and featuring adjustable PWM, the new house lights are silent and flicker free, making them well suited for the recital hall application.

“We chose the Ovations due to their great even spread, the extreme amount of light output and great color temperature,” said Rafael. “They dimmed great and were exactly what we needed to replace the old house lights.”

Garcia also used 17 LED wash fixtures to replace the tungsten pars that were positioned above the stage and nine LED ellipsoidals to replace older tungsten counterparts. All of the lighting was controlled via an Interactive Technologies CueServer Express and CueTouch LCD touchscreen. 4Wall’s system installation team programmed the touchscreen with presets to allow scenes to be changed easily on the fly.

“Our site foreman David Estrada deserves a lot of credit for the success of this project as do our contacts at USC, Brandon Operchuck and Jeff de Caen. It was a great team effort.”

It was a team effort too back in 1999, when the Hancock Building Auditorium (as the hall was then known) underwent a major remodelling aimed at achieving acoustical perfection. The facility, which opened in 1940, was literally reshaped to improve its acoustics. It also had a motorised variable acoustics system installed to optimise different types of musical performances.

Now with the installation of the new lighting system from 4Wall, the Alfred Newman Recital Hall represents state-of-the-art achievement visually as well as acoustically. The great composer, who worked primarily in the visual media of film, would undoubtedly be pleased with the changes made to his namesake facility on the USC campus.