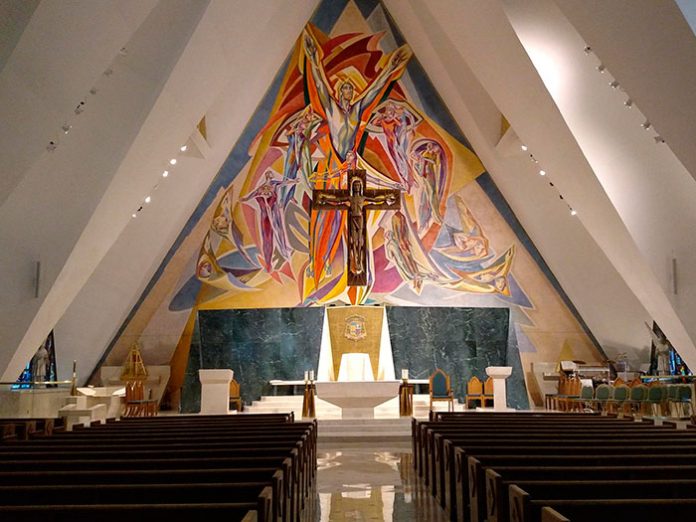 Built in 1963, the cathedral is the home church for the Roman Catholic Diocese of Las Vegas. It serves local families and Las Vegas tourists with its daily masses and other services. Its attractive “A-frame” design features beautiful stained glass windows and polished tile floors. However, combined with a 66-foot height, these features result in a high reverberation time which benefits the choir and organ but detracts from speech intelligibility.

The cathedral’s older sound system was unable to provide acceptable voice quality in this reverberant environment. Thus, in 2015, Guardian Angel contacted Steve Keating of Mission Electronics to analyse its system and recommend a course of action. Steve tested the existing system and found that the sound was muffled and the intelligibility was poor when the sanctuary was empty and even when it was full of people during a mass.

Rather than simply repair the old system and to keep costs down, Keating recommended a new system using Community ENTASYS ENT212 column loudspeakers distributed along the cathedral walls.

Guardian Angel’s new system consists of two Community ENT212s on each side of the sanctuary and one on each side of the balcony for a total of six columns. The loudspeakers are progressively delayed to synchronise arrival times throughout the sanctuary. Keating reused the cathedral’s existing under-balcony ceiling loudspeakers and powered the system with Crown CDI amplifiers.

A Behringer X32 RACK mixer provides auto-mixing capability allowing hands-free operation for most services and a Behringer DEQ2496 DSP provides delay and system equalisation. The cathedral has four wireless microphones for clergy use, a pair of wired microphones on the lector and cantor podiums and a Denon media player with USB input for weddings and other services. A floor-mounted microphone input was repurposed as an audio output for videographers.

Steve says the new system’s speech quality is clear and coverage is uniform throughout the sanctuary. A former skeptic told him, “the sound is great” and the head usher commented, “there’s a night and day difference; we can go anywhere in the church now and understand!”