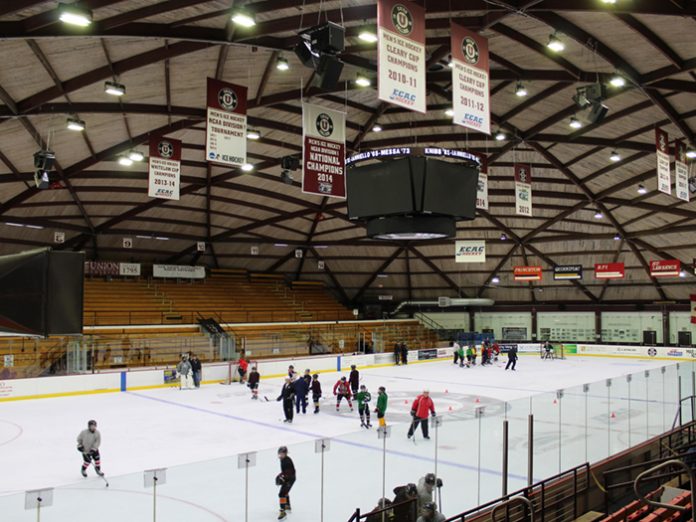 Although Union College has only 2,600 undergraduate students, the private liberal arts college’s men’s ice hockey team competes quite successfully with much larger schools in NCAA Division 1. The Union Dutchmen even won the 2014 national championship over such sports powers as Minnesota, Boston College, and Providence.

“The old system was inadequate, with outdated technology,” Chuck reported. “It had been slowly failing over the years and had issues with intelligibility. We ended up installing an almost entirely new sound system.” Chuck specified a powerful, flexible Dante audio system based on four Linea Research 44C06 power amplifiers, EM Acoustics loudspeakers, and a Symetrix Radius EX 12×8 DSP.

“This was one of our first Linea Research installs,” Chuck revealed. “Their manufacturer representative, Rich Trombitas of Cardone, Solomon & Associates, brought them to our attention. We were impressed with the fact that Linea Research amplifiers pack plenty of power in a small footprint since we didn’t have the capacity to add more rack real estate to the sound booth.”

In addition to needing high-quality sound and modern network features, Union College Director of Athletics Jim McLaughlin specified a system that was simple enough for their non-technical operators to use. Moreover, he needed it done quickly. “This project had an extremely tight build schedule,” related Chuck. “They wanted it in time for the opening of their season in early October. There was no spare time; we were offloading speakers from the airline transport company as they were preparing the ice for practice the next morning. We liked that Linea Research amplifiers were deliverable within our very tight schedule—and they worked out of the box. There were no surprises. That met all of our objectives.”

Linea Research 44C series amplifiers integrate 96 kHz DSP running manufacturer-crafted algorithms for such features as LIR linear phase filters and the powerful VX Limiter suite. “We set certain parameters with the amplifier DSP, limiting output power because the Linea amps delivered more than enough juice,” noted Chuck. “So we had plenty of headroom, which was a great situation to have. Coupled with the EM Acoustics speakers, it really was a nice marriage.”

Each EM Acoustics loudspeaker cluster in the new main system incorporates MSE-159, Halo-CS, and EMS-121X loudspeakers, all integrated into a custom flying frame. “Another thing we did that made the client extremely happy was to repurpose the existing speakers that were still working, relocating them into some areas that had no audio reinforcement,” Chuck added.

The Symetrix Radius EX managed the network while meeting director McLaughlin’s ease-of-use requirement. “This was not my first rodeo with Symetrix,” reported Chuck. “We used Symetrix because of our previous experience with it, our knowledge of the product, and its reliability. By using the Symetrix DSP, limiting the window of gains for the different microphones, and limiting the output of the Linea Research amplifiers, the system has more than adequate SPL where it needs to be. We gave them simple controls with a couple of Symetrix ARC-3 wall panels and SymVue software running in the control booth. The staff could literally take somebody off the street and show them in 15 to 20 minutes how to use the system, and they’d be able to operate it.”

The combination of Linea Research amplifiers, EM Acoustics loudspeakers, and Symetrix DSP and control has been a winner at Union College. “This was our first major project with Union College,” averred Chuck. “The system is in use and the client is completely happy with it. I will absolutely use Linea Research again when the opportunity arises.”