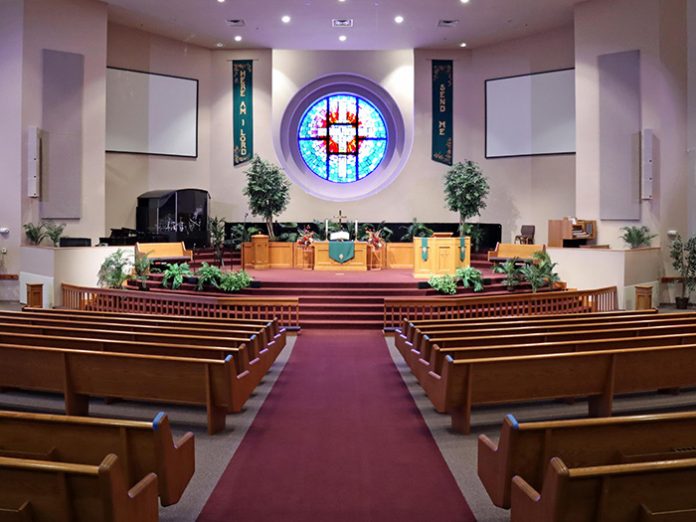 Faith United Methodist Church in Tulsa, Oklahoma is one of many churches that has worked to ensure its services remain accessible to all during the 2020 global pandemic. When churches had to shut their doors, the Faith United Methodist team shifted to video streaming. When social distancing practices became more clearly defined, they developed a hybrid model – allowing a few in-person worshipers to join them at the church while they continued the stream.

That said, there was a unique challenge with that hybrid return: with the on-site sound system running, the audio on the stream became increasingly unintelligible.

“The sound system we had was spraying sound all around the sanctuary,” said Mark Eldridge, Director of Tech Ministries at Faith United Methodist Church. “Sure, it was hitting all the people, but it was hitting all the walls as well. That’s been a challenge with the on-site sound for some time. It wasn’t always the most intelligible sound. But then, with streaming video, you really can’t have that sound getting back to the mics because it really muddies up the mix.”

To repair the local sound – and, in turn, vastly improve the sound quality of the streaming video content – the church turned to Renkus-Heinz.

“We were already planning on making upgrades to our system,” Mark said. “I had been researching it for about five years and I knew steerable loudspeaker technology was going to work great in our space. When we unexpectedly had to begin live-streaming the services we quickly found the audio we were providing to our congregation was not at a high enough quality. We immediately began looking at what we needed to do it right. The obvious answer was to go with Renkus-Heinz.”

Faith United Methodist Church’s newly designed system is powered by Renkus-Heinz ICLive X Series, with two arrays installed on the edges of the space each made up of three modules – two ICLX loudspeakers and one ICLXL loudspeaker.

“Making sure the audio was focussed on the in-person congregation was our highest priority,” said Curt Taipale of Taipale Media Systems – the firm that designed the system. “By using Renkus-Heinz we were able to make sure sound was going where it was needed, and not filling unnecessary space. And when you solve that challenge, you solve the sound on the stream as well.”

Faith United Methodist said after the first run with the new system, it impressed not only those in-person, but also garnered praise from the streaming viewership as well.

“Everyone from the staff to the worshipers have noticed the drastic improvement in audio quality we got with Renkus-Heinz,” Mark said. “Worshipers who have been tuning in via live-stream are calling in words of praise as they’re finally getting an immersive service experience from their homes.”

Renkus-Heinz representative Michael Austin of Native Media provided assistance throughout all phases of the project. Renkus-Heinz provided on-site commissioning of the system, and Taipale Media Systems sent consultant Tom Tyson for on-site setup services. The tuning of the system was completed in just a few hours.

Additionally, a custom paint job allows the loudspeakers to mount seamlessly into the space. Renkus-Heinz provides custom fabrication of speakers from its Foothill Ranch, California facility – allowing for every loudspeaker to match the precise location where it is being installed.