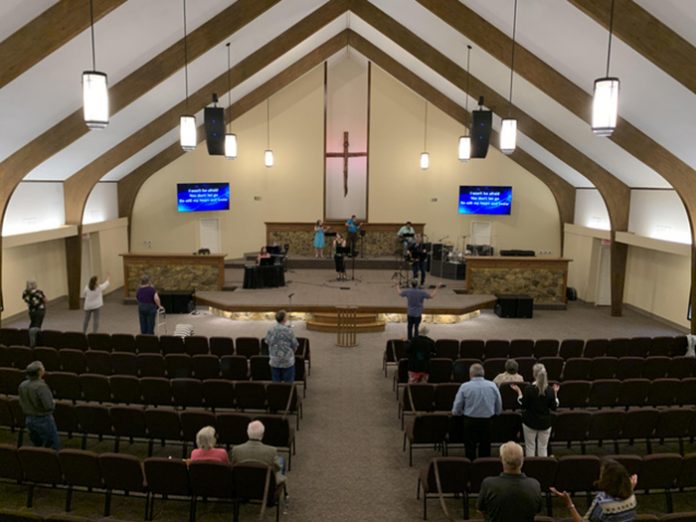 Robert Wirtz hails from a 30-year career as a recording engineer, a role he still plays at Fort Worth’s Legendary Sound Studio and as proprietor of Ardub Music. Whenever he can, he puts his passion for perfect sound into the service of houses of worship. In nearby Lewisville, the Shepherd’s House Church was struggling with the patchwork P.A. system when, in July, thanks to a last-minute, anonymous donor, the church was able to commission Rob to design the optimal system for their sanctuary. After extensive computer analysis of the room, Robert recommended a QSC KLA Series line array consisting of a total of eight KLA12 active line array cabinets and four KS118 active subwoofers — an install twice as large as their original plans.

“For every system I install, my philosophy is that I want it to sound as good as the nicest theater you’ve ever been in,” said Robert. “When a church calls me, I’ll go in and 3-D model the room, put virtual speakers in the model, and so forth. My main attraction to QSC for this application is bang for the buck. I think it’s remarkable what they’re pulling off with their equipment. While many ‘prestige’ brands are off limits to a lot of churches’ budgets, I’m impressed that QSC achieves superior sound quality for a lot less money.”

At Shepherd’s House, Robert’s first task in achieving that quality was assuring that every seat in the house is a good seat. “The building is very much what you’d think of an older church,” he explains. “It’s a big A-frame, with the ceiling about 50 feet at its apex, windows on the sides, no acoustic treatment, and a balcony in the back. For budgetary reasons, they originally wanted to go with a few point-source boxes per side. That would have worked, but we would’ve needed delay speakers to fill the back areas, and every time you add another point-source, you add potential phase issues. With a properly configured array like KLA, the sound is phase-coherent everywhere. I needed the back row of the balcony to have the same experience as the front row in the sanctuary.”

The KLA12’s coverage characteristics spoke directly to this need as well as the church’s budget. “Most line arrays I’ve worked with cover 12 to 15 degrees along the Y-axis — which is what translates to front-to-back in the house,” noted Robert. “The KLA specs say they cover 18 degrees, but it feels more like 20 or 25. They’re just so forgiving. With one box I can hit three rows of chairs; with two, about eight rows. So, this let me achieve more coverage with fewer boxes per side. That really saved the church money.”

So did the KLA Series’ onboard DSP. “With most arrays, you’d need separate system processors to determine the level EQ for each box,” Robert detailed. “That can add thousands in cost. With the KLA, it’s all built in. You set the number of boxes per side with a dial on the back, and the system knows how to drive and EQ each box.”

In terms of bass extension, Robert was in for a pleasant surprise. “I had originally drawn this system with the KW181s,” he recalls. “When I went to buy the gear at Texas retailer Sound Productions, Kris Landrum there recommended the KS118s. I’d had no experience with them before, and could not believe the difference. They’re about the same price but at least twice as powerful. The low end is deeper, and it’s a more articulate sub. The KW181 was always a great workhorse, but the KS118s are a whole other level.”

Associate pastor and audio director Mike Bauman could not be happier with the results. “We have a decent sized band, including a keyboard, bass, drums, violin, viola, flute, wonderful singers, and I’m usually playing acoustic or electric guitar,” he says. “We play contemporary Christian ‘greatest hits’ from the likes of Bethel, Hillsongs, and Chris Tomlin, plus some material I co-write with our keyboard player. Before, people were always telling me that some instrument was too loud or too soft, they couldn’t hear the vocals, something was static-y — I had several unhappy emails every week.

“With QSC, everything is so much better now,” he continues, “my inbox is full of compliments. The sound is so clean and clear all throughout the sanctuary. Our recordings are better. We’ve only had the system since July, but the difference is so dramatic that it’s like those before-and-after pictures on weight loss commercials. People have literally told me they’re feeling the presence of God because of the music.”

For Bauman and his congregation, that presence is what gifted The Shepherd’s House with Robert’s expertise and the P.A. of their dreams. “So many vendors sent us proposals, but Rob was so conscientious and engaged that I believe God sent us him,” he beamed. “He was trying to do all he could for us with a budget for a system half this size. Then, this couple saw one of our services online. They didn’t even go to our church, but told us, ‘We’ll match the budget so you can get exactly what the room needs — nothing but the best.’ Some of our board members suggested different brands, but Rob was convinced QSC would be perfect for us. Boy, was he right. It’s been nothing less than a miracle.”