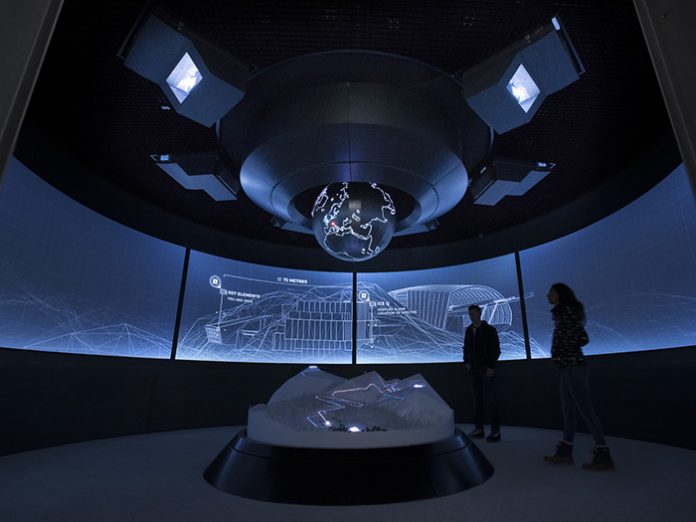 007 ELEMENTS is a world-first cinematic installation dedicated to the iconic world of James Bond. The installation guides fans on a journey through a series of high-tech, interactive rooms, each exploring the trademarks of the Bond franchise – the instantly recognisable music, the fast-paced action scenes, the cars, the gadgets, the beautiful locations, and the compelling cast of characters. The visitor experience is sited at one of the iconic film locations in the Bond film Spectre – built into the Gaislachkogl mountain in Sölden, Tyrol, Austria – 3,040 metres above sea level. Leading audiovisual system integrator Kraftwerk Living Technologies was behind the technology in seven of the attraction’s nine rooms; responsible for the technical design, installation and programming.

Tempest supplied nine Blizzard 52.100.UEP projector enclosures, specially designed to accommodate the Epson ELPLX01 UST lens, on Epson L1300U projectors. The technology allowed Kraftwerk LT to implement high-impact projection elements in multiple rooms, including a 360º panoramic room designed to immerse guests in the Bond universe with custom big-screen content. The nine rooms have been integrated with a host of interactive technology to complement the building’s stunning architecture and awe-inspiring views to deliver the Bond experience.

“Tempest has developed considerable expertise in the tricky business of housing ultra-short throw projectors, whose extremely wide beam angle makes the positioning of the port glass critical, in relation to the projector’s optics,” said Tim Burnham, Tempest’s President. “With such low operating temperatures, protective enclosures were a ‘must’ for the projectors in this project. Thanks to the Blizzard UST enclosure’s installation flexibility, Kraftwerk LT was able to mount them subtly – above the image – with no clipping. What strikes you in this project is that the team at Kraftwerk LT has managed to integrate some amazing technologies to help recreate that authentic James Bond feel, all in an appropriately stunning location – something which I’m sure will prove to be a huge success.”

The building – which covers an area of 1,300 metres² over two floors – is kept at a temperature of 5° Celsius or less in order not to influence the permafrost soil. This presented some challenges, with hardware exposed to low temperatures. Special air conditioning housings were developed in order to keep hardware fully functional. Furthermore, care was taken to use flexible technology throughout, allowing content to be easily updated in the future when required.