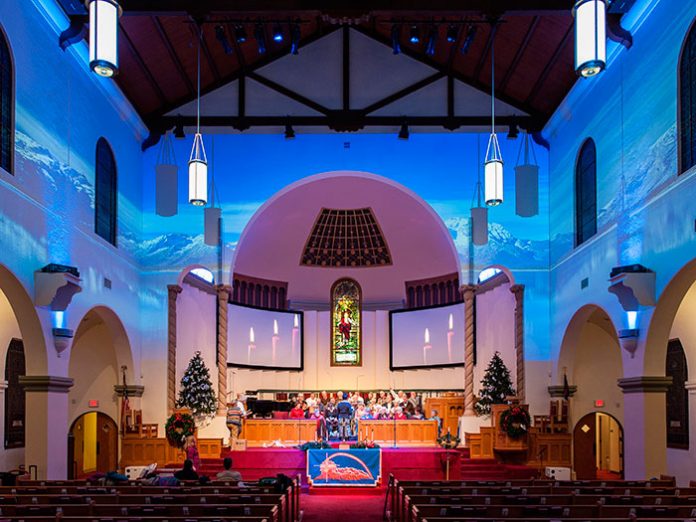 The sanctuary at Central United Methodist Church, located in Albuquerque, New Mexico, is a long, shot gun style room that seats up to 1,000 congregants at every service. The room features traditional architecture with an abundance of hard surfaces that create a reverberant space and wreaks havoc on vocal intelligibility.

During a recent sanctuary renovation, the church leaders decided it was time to upgrade to a new sound reinforcement system to solve the intelligibility issues once and for all. They called upon Oklahoma-based Fowler, Inc. to design and install the new system which included Tannoy QFlex.

“The sanctuary has wood everywhere and a domed narthex area behind the alter,” Scott Lopez, Director of Technology at Fowler Inc. explains. “There is a pulpit and lectern – left and right of the stage – and the ceiling is almost 60 feet tall. The pews are wooden, the floor is hard, and walls are flat and contain stained glass windows, so naturally it was a challenge to hear the spoken word clearly”.

At the same time, the church was very proud of its organ and choir, which flourished in the reverberant space. The hope was to find a sound reinforcement system that would require little or no acoustic treatment – allowing the choir and organ to shine – while also providing vocal clarity that the congregation required.

The Fowler team installed a pair of QFlex 40s, one to the left and right of the alter/stage opening, approximately 10 feet behind the lectern and pulpit. Each QFlex enclosure consists of three connected modules that house a total of 8×4-inch LF, 16×3-inch LF and 16×1-inch HF drivers – each with its own discrete channel of amplification and integrated DSP.

Tannoy QFlex steerable arrays provide controlled directivity, so it is relatively simple to place the sound on the seating areas and keep it off of the walls, substantially cutting back on reflections from hard surfaces.

“With the balcony at the back of the church covering the last few rows of pews, we decided to use delays to cover the under balcony seating,” Lopez adds. “And because the ceiling above the balcony was flat, we provided some extra coverage there as well. We installed 4 Tannoy Di8 loudspeakers along the edge where the cathedral and balcony ceilings meets and two more for under the balcony.”

For added low end, a pair of Tannoy VS 10BP subwoofers were placed in a cove in front of the stage, behind the lectern and pulpit.

“We selected Tannoy QFlex because it allowed us to steer the sound, which was extremely important,” concludes Lopez. “We replaced a noisy and boomy system with an engineered solution that allowed us to control where sound was delivered. The church leaders and congregation were very happy with the end result that was clear, musical and blended well into the design of the room.