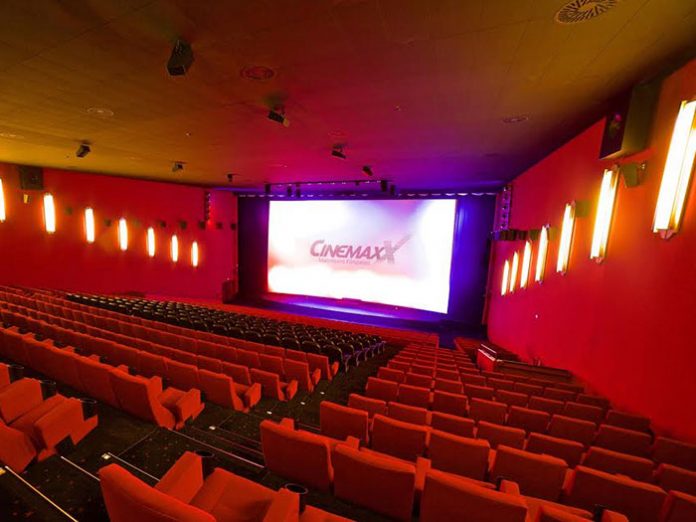 With 700 seats, the Kino 10 of CinemaxX Mannheim is among the largest cinemas in Baden-Württemberg; with almost 280 square metres the screen is definitely the largest.

The Filmtheaterbetriebe Spickert Entertainment GmbH, the operator of the CinemaxX, already chose, with the Cinemarray pro-ribbon system in 2012, for a sound system of the Dutch premium manufacturer Alcons.

With the conversion to Dolby Atmos, the leading 3D Sound solution for immersive sound experiences in the cinema, an extension of the sound system was recently carried out.

With the Alcons sound system, we have created in our Kino 10 one of the most modern cinemas in Europe. The professionalism and quality of Alcons has convinced us from the start”, explains Frank Noreiks, CEO of Filmtheaterbetriebe Spickert Entertainment GmbH.

The speaker systems have been installed as top surrounds and wall surrounds, according to the Dolby-calculated design. This makes the CinemaxX Mannheim currently the only cinema with Atmos technology on this side of the Rhine in the Rhine-Neckar region.

With this upgrade, the operator of CinemaxX is responding to the increased expectations of moviegoers. Digitization also entered the cinema world and set a wave of technological evolutions in motion, facing theatre operators with entirely new challenges. The modern, high-resolution media put strict requirements on the production chain in general and the performance of the theatre speakers in particular. Complex sound impressions should be reproduced with the finest details at full dynamics – everywhere and in every conceivable application.

The unique Alcons pro-ribbon mid- high frequency transducers reproduce the original sound of a movie without signal summation, coloration or distortion of sound. And that in really any system size.

Frank Noreiks: “Today moviegoers specifically look for upgraded cinemas. To that extent the conversion to the latest technologies offers us a clear competitive advantage. Dolby Atmos for us is the logical development of the already existing Dolby systems in our cinemas such as Dolby 7.1”, Noreiks continues. “The addition of additional audio channels creates an even more realistic sound experience for the viewer. It is noteworthy that it’s not about increasing the sound pressure level, but perfecting the sound experience to a higher resolution”.

Both for the initial and the subsequent installation of the loudspeakers Fours GmbH from Heidelberg was commissioned, under the project and installation management of Florian Iser.

On 13 July 2016, the CinemaxX finally celebrated the premiere of the new sound system with “Independence Day: Resurgence”. Kino 10 is thus today one of the largest Dolby Atmos cinemas in Europe!

Finally noticed Noreiks: “Our Kino 10 is a cinema of the future – more cinema is not possible! With Alcons, we have the most competent partner on our side to make cinema as progressive as possible”.