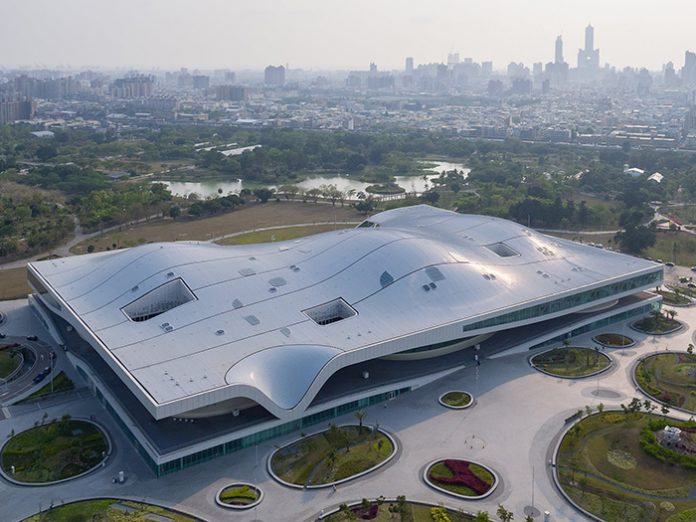 “Renkus-Heinz is one of the famous steerable speaker manufacturers in the world,” noted IX Technology’s Sam Chang. “We’ve installed their loudspeakers in theatres in Taiwan for many years, with remarkable results. Renkus-Heinz digital beam-steering technology enabled us to address the complicated requirements of this project.”

Construction delays added considerably to the project’s complexity. “The speakers arrived at the job site and sat for over two years,” Sam recalled. “Before the air conditioning was working, the temperature and humidity were very high, which affected our equipment, and the site was dusty due to the construction. We spent massive amounts of time checking and resolving equipment problems.”

Used mainly for chamber music, solo recitals, and other smaller performances, the 470-seat Recital Hall is the smallest of Weiwuying’s indoor venues. A short partition wall along the centre line of the seating area converts the Recital Hall into a vibrantly asymmetrical shoebox, while also providing reflection of direct sound for the front seating area. “While it’s an excellent design, the lack of symmetry made the adjustment of the delays more difficult,” observed Sam. The hall’s sound absorption can be adjusted to meet the needs of various types of performances; an entire circle of adjustable sound-absorbing drapery surrounds the upper half of the hall.

The Playhouse is primarily used for drama and dance performances. Its stage can be configured into proscenium or thrust stage. The thrust stage design shortens the distance between the audience and performers, so that the audience can perceive the emotions of the performers at close proximity. The proscenium stage with the orchestra pit elevator has a capacity of 1,231 seats; when configured into thrust stage, the Playhouse can accommodate 1,067 seats. As with the other three indoor venues, the floors are pine, and the walls and ceiling are of glass fibre-reinforced gypsum (GRG).

Weiwuying’s Concert Hall features a magnificent 9,194-pipe pipe organ and has a unique vineyard design that allows patrons at various heights to enjoy the same optimal acoustic and visual effects. The seating accommodates 2,000 and encircles the stage, bringing the audience close to the stage for an intimate experience. Acoustic shells above the stage can be lowered or raised and their heights and angles freely adjusted.

The largest such facility in Taiwan, the 2,260-seat Opera House hosts operas, major drama productions, dances, and interdisciplinary performances. The seats are arranged in a horseshoe. The ground-floor seating area is divided into four zones by short partition walls, and the balconies on the second and third levels feature continuous horizontal lines to provide continuity and a sense of rhythm. The huge orchestra pit elevator in front of the stage fits a full orchestra for grand operas.

Nine Renkus-Heinz ICONYX IC16-RII and IC8-RII digitally steered arrays handle the main system in the Opera House. For front fills, the designers chose a dozen CFX41 compact four-inch coaxial two-way loudspeakers. The rest of the system uses much the same components as the other Weiwuying halls: 14 PN121-series speakers for monitors or portable use, a pair of PN-151/9s, and eight PN61s.

“Each of the four halls at Weiwuying Kaohsiung Center presented distinctive acoustical and coverage challenges,” noted Sam. “We overcame many of the most difficult challenges using Renkus-Heinz ICONYX beam steering technology but we also relied on Renkus-Heinz’ wide variety of fill and subwoofer loudspeakers. By carefully combining these elements, we were able to provide excellent coverage in all four venues. The Weiwuying Kaohsiung Center is Taiwan’s most significant cultural project in 30 years, and we are honoured to provide a sound system that fully meets the high standards of this amazing facility.”