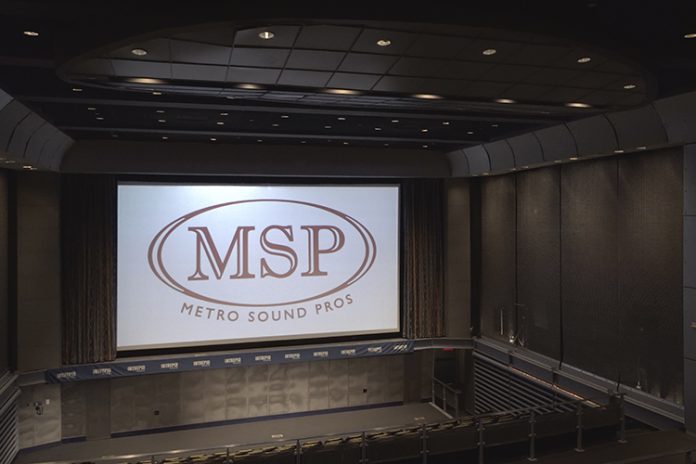 Founded in 1982 and located at Pier 86 on the West Side of Manhattan, the Intrepid Sea, Air & Space Museum’s mission is to promote the awareness and understanding of history, science, and service. The museum is built into and around the aircraft carrier USS Intrepid, which served tours of duty in World War II and the Vietnam War and was a recovery vessel for the Gemini and Mercury space missions. The museum also displays the space shuttle Enterprise, some of the world’s fastest jets-including the British Airways Concorde-and the only guided missile submarine open to the public.

“The design concept was to create multiple presets for the different functions and to simplify I/O expandability,” added Metro Sound Pros Senior Designer Leo Garrison. “Thanks to the Symetrix Radius DSP’s processing power, we were able to easily accommodate the theatre’s multiple uses.”

The Lutnick Theater’s new system employs a Radius AEC, which provides a complete audio AEC solution in a single box, with dedicated wide band processing, zero-latency direct outputs, scalable 64×64 Dante networking, and input from mic/line or internally routed signals. It comes with eight AEC inputs, four aux inputs, and eight outputs and can be expanded with any Symetrix audio I/O option card. The Radius AEC in the Lutnick Theater is equipped with Symetrix xIn 12 and xOut 12 Dante-enabled analogue expanders.

“Utilising Dante-enabled Radius products satisfied multiple needs that occur within the ship’s audio visual department,” asserted Richard. “Any future needs the ship may have with regard to expansion or new concepts that come up from the audiovisual staff can now be easily addressed.” “With the everyday changes on the Intrepid, the choice of Symetrix was beyond ideal,” agreed Leo. “The Symetrix family of products simplified the expandability currently needed and moving forward.”

As attractive as Lutnick Theater is, with its plush seating, advanced audiovisual capabilities, lighting, staging, and more, it’s by no means the only part of the Intrepid Museum that benefits from Symetrix processing. “We also installed a Symetrix Radius 12×8 EX DSP down in the Welcome Center, which has a restaurant, and that DSP also serves the exterior pier,” detailed Leo. The Intrepid pier offers direct access to the Hangar Deck and Flight Deck and provides a versatile and park-like space for corporate picnics, concerts, festivals, seated dinners, and many other types of outdoor events.

The Symetrix Radius 12×8 EX DSP features a configurable input/output option card slot, 64×64 scalable Dante, 12 analog mic/line inputs, and 8 analog outputs. “We installed the Radius 12×8 EX with xIn 12 and xOut 12 Dante-enabled analog expanders, and in addition to its other functions, it enables us to control all of the delays throughout the site,” Leo noted. “Thanks to the Radius, the pier and the Welcome Center have powerful, networked audiovisual capabilities that we can expand as needed.”

With its many changing programs, exhibits, and event spaces, the Intrepid Sea, Air & Space Museum is worth repeat visits. “We aren’t concerned about meeting future audiovisual needs as the museum develops,” observed Leo. “The Symetrix Radius-based systems we installed can handle anything the museum needs now and in the foreseeable future, and in addition to their features and expandability, the Radius DSPs sound great!”