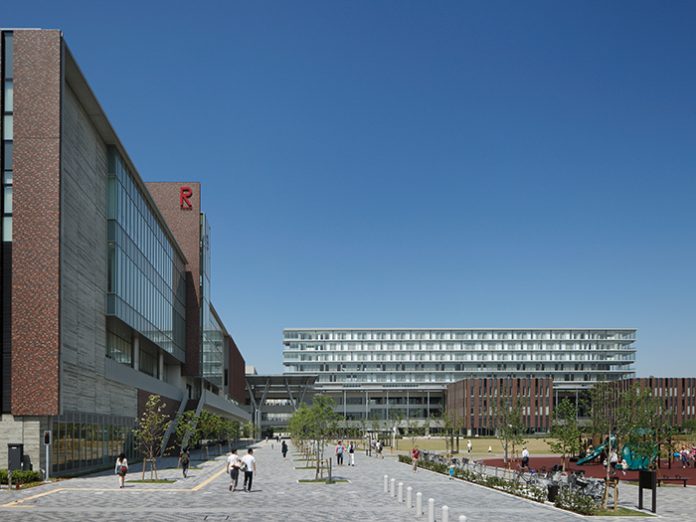 Founded as a private academy on the site of the Kyoto Imperial Palace in 1869, Ritsumeikan University is one of the most famous private universities in Japan. In addition to its Kinugasa Campus in Kyoto, Biwako-Kusatsu Campus (BKC) in Shiga, and Osaka Ibaraki Campus (OIC) in Osaka, it includes international educational institution Ritsumeikan Asia Pacific University (APU), four senior high schools, four junior high schools, and one primary school. Symetrix Radius-series processors manage extensive Dante audio networks at the Kinugasa Campus, the primary school, and Asia Pacific University.

“One reason we chose Symetrix DSPs is their monitoring capabilities,” noted Mr Kengo Kurashina of Ritsumeikan’s Office of Information Infrastructure, Information System Department. “With Symetrix, the DSP is no longer a black box. With other DSPs, we could not monitor the DSP’s settings without special designer software. But with Symetrix’ SymVue software, we can monitor and adjust the DSP’s specific parameters, and we can even monitor the audio. Symetrix provides Dante connectivity which has been essential to our projects, as well as powerful processing modules, such as feedback fighters and automixing.”

Symetrix’ ability to control other equipment over the network was an important factor in choosing the Radius. For example, five Radius AEC DSPs handle the videoconference rooms at Ritsumeikan Asia Pacific University/Kinugasa Campus, and SymVue remote-controls the system’s Watchboot network-controllable power conditioners over Ethernet. “Sometimes equipment needs to be rebooted to function properly,” Kengo explained: “In the past, someone needed to visit the site for that, or we’d need a third-party control device. But with SymVue, we can reboot the equipment remotely, saving staff time and total system cost. We have two more Radius AEC processors monitoring and controlling a pair of videoconference rooms at the APU campus in Oita prefecture.”

Another pair of Radius 12×8 EX DSPs handle Dante audio in two rooms at APU’s information centre. “We use SymView to monitor levels and other parameters, and the feedback fighter has been especially valuable in these rooms,” commented Kengo.

At the Kinugasa Campus’ Zonshin-kan Hall, eight Radius 12×8 EX DSPs serve a series of large and medium-sized classrooms, driving a network of 100 Marin Audio C4.8 ceiling speakers. All eight DSPs are remote-controlled over RS-232. “Symetrix’ linear to custom taper module lets us make an ideal volume curve for level control, something we could not do with other DSPs,” Kurashina reports. “We have another Radius 12×8 EX in the same building to manage the students’ practice courtroom. For the courtroom system, we needed multiple analog inputs and outputs in various locations, so we added a Symetrix 4-channel analog input card and Symetrix xIn 4, xIn 12, and xOut 4 analog expanders. This makes complicated audio routing and wiring easy.” The Radius also manages the courtroom’s Audio-Technica ATND8677 Dante-enabled microphone desk stands for use with gooseneck microphones.

In Gakuji-kan Hall, on the same campus, six Radius 12×8 EX DSPs manage a half-dozen large and medium-size classrooms. “This project also uses GPI for recalling PTZ security camera pre-sets,” detailed Kengo. “A switch is connected to GPI, and when you push it, the Radius sends the command over Ethernet to the camera and recalls its pre-sets.”

Because Ritsumeikan has so many branches all over Japan, its primary campus’s teacher room offers videoconferencing and web conferencing, which rely on Dante-networked audio managed with a Symetrix Radius AEC. For web conferencing, teachers plug into an Attero Tech unDUSB Dante-networked audio interface, which acts like a standard stereo sound card to bridge a computer’s stereo audio directly to and from the Dante network. A Dante-enabled Shure MXA310 table array microphone serves as an audio source for videoconferencing.

“The ability to control all of this equipment and manage the Dante streams from Symetrix SymView is great,” said Kengo. “Symetrix has given us many capabilities we didn’t have with other DSPs, and it’s all well integrated. This was my dream for past 10 years!”