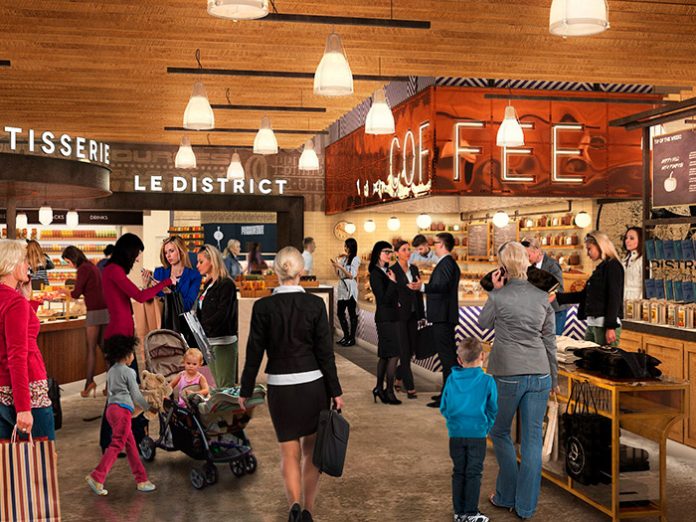 Opening its doors for the first time in spring 2015, New York’s Le District offers a very fresh take on French cuisine with a wide variety of vendors situated under one roof. The approach taken to the audio is similarly original, with music unexpectedly to the fore thanks to a high-quality infrastructure based around a single Symetrix SymNet Radius 12×8 EX open-architecture Dante DSP.

Locally-based El Media Group was enlisted to specify and install the audio system, and as co-founder and Chief Creative Officer Ernie Lake observed, there were several primary factors that influenced the choice of DSP. “Firstly, this is a large site of around 30,000 sq ft and there needed to be the option to play back different music in different areas. Ultimately, the space was divided into eight zones – café, dining rooms and so forth – and we required flexibility of playback for all of them,” he said.

“Secondly, and in contrast to many other public spaces of this kind, the operators really wanted the music to be positioned to the fore – it’s really an integral part of the brand. So guaranteeing a high quality of playback was extremely important.”

Positive experiences with SymNet Radius DSPs on a wide range of retail, restaurant and bar-style installations meant that, “there was no hesitation in determining that this would be an appropriate processing solution for Le District,” said Ernie. Equipped with a SymNet four-channel analogue input card to ensure sufficient accommodation of multiple sources, the SymNet Radius has been deployed in conjunction with two Symetrix ARC-2e wall panel remote controls – one located in the bar area and the other adjacent to the main systems rack.

“In addition, the managerial staff at Le District have the free Symetrix ARC-WEB browser-based interface accessible via their smart phones so they can control volume, mute, source selection and other primary parameters quickly and easily,” remarked Ernie. Rounding out the core audio specification at Le District are amplifiers from Lab.gruppen’s install-dedicated C Series, along with loudspeakers from Community Professional, SoundTube and Tannoy. Installation and fine-tuning were completed shortly before the market welcomed its first visitors in March.

“Once again SymNet Radius has proven to be a very versatile processing tool, allowing us to configure it perfectly for the application at hand,” said Ernie. “I would also highlight the high standard of support that we continue to receive from Symetrix – which always helps to provide the reassurance you need for projects where 24/7 reliability is of the utmost importance. They never let us down.”