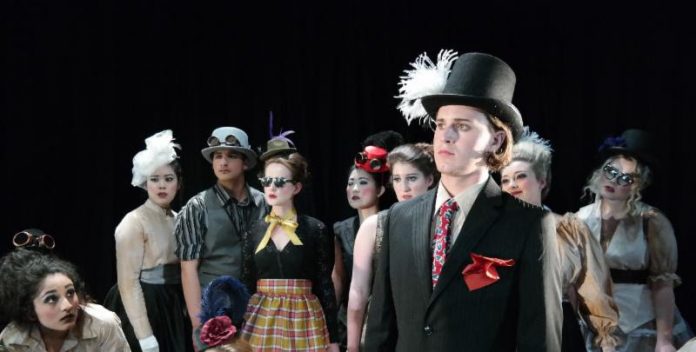 International lighting designer Hartley T A Kemp has employed Philips Selecon and Showline LED luminaires alongside classic Philips Vari-Lite tungsten to deliver crucial colour vibrancy and consistency on a production of English Eccentrics by the University of Sydney’s Conservatorium of Music.

Based on the literary classic by Edith Sitwell and composed by University of Sydney alumnus and former Master of the Queen’s Music Malcolm Williamson, this rarely-performed tragi-comic opera celebrates an assortment of outlandish and real-life characters from various echelons of 19 Century English society. The piece satirises the eccentricity that typified the British, and examines the often strange and lonely lives of these 19 Century celebrities and eccentrics.

In Kate Gaul’s production, conducted by Stephen Mould, LD Hartley was tasked with evoking the world of an asylum or institution which the characters may or may not inhabit, and of creating the colourful worlds of each character’s individual stories.

He therefore specified an array of Philips Selecon PL3 and PL1 and Philips Showline SL BAR 620 LED luminaires to add vital colour to the set up and shift between the individual vignettes making up the piece, which each had a different look, feel or location.

“The Philips Entertainment LED fixtures were used for their ability to smoothly cross-fade from one colour to another,” explained Hartley. “I was impressed with the units’ consistency in recalling the same color time after time, their deep saturated hues, and their Hartley quiet running.”

Hartley positioned two PL3 units as top backlight, with a further two as side backlight, saying: “I hadn’t used the PL3 units before, but selected them on this piece for their color-changing ability and punch.”

“I was also pleased with how well the LED units worked alongside the conventional lights in the rig, including the VL1000TS units,” continued Kemp. “These were used for their accurate positioning, shutters, and their tungsten output, which helped them work well with the rest of the rig.”