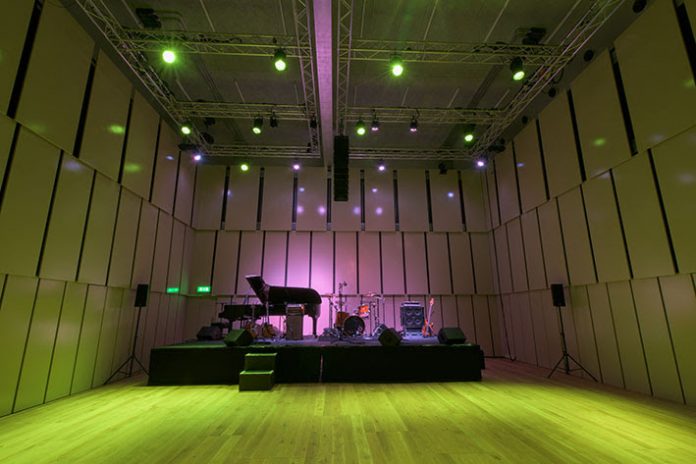 Over the past couple of years the iconic Liverpool Philharmonic Hall, home of the Royal Liverpool Philharmonic Orchestra, has undergone a major £14.5 million refurbishment. This has included the building of a brand new smaller-scale venue, Music Room, on which Stage Electrics and Northern Light worked closely together to supply and fit out, as well as being major contractors for the 1700-capacity main auditorium.

The project was split into two phases. Phase One focused on the main Hall whose 1939 art-deco style architecture has earned it Grade II*- listed status. It included works to the auditorium, all public, front of house spaces, and backstage dressing rooms and warm-up areas.

Phase Two was a new build project including Music Room, for which Stage Electrics supplied the lighting, sound and staging equipment. Located at the rear of the main Hall, Music Room is a 160-250 variable capacity space, designed to host a range of concerts and events which complement the programme in the main auditorium, as well as being a venue for Liverpool Philharmonic’s extensive learning programme.

At the request of Gail Wroth, Head of Production at Liverpool Philharmonic, Stage Electrics’ Rob Beamer visited the venue with a range of demonstration equipment including the latest technologies. This enabled the in-house Production Team to refine the original equipment specification, particular emphasis being placed on speed of set up, running cost and flexibility. The final specification then went to a three part competitive tender, which included lighting fixtures, consoles and accessories; audio mixing desk, microphones and flight cases and, finally, staging.

“We were really pleased to win all three parts of the tender, we knew the enhanced equipment list made economic sense for the venue” said Rob. “For example, the original specification included a lot of tungsten lanterns, whereas we suggested all LED fixtures, which are very easy to use and means less rigging time. We also suggested the new MA dot2 lighting console, which the in-house team thought was brilliant. The spec ticked every box they needed.”

Stage Electrics also supplied a Soundcraft Vi1 mixing console and stage boxes, a range of microphones, custom flight cases and LiteDeck staging with handrails and treads complete with storage trollies for when the staging is not in use.

“Our logistics team kept in constant close contact with Liverpool Philharmonic’s Technical Manager, Richard Curtis, on delivery times and methods; part of Hope Street, where the Hall is located, had to be closed while we offloaded the equipment, so timing was very important,” said Rob.

Following the project’s completion, Rob ran some training sessions for the n- house Production Team and has been available on an ongoing basis to answer any questions. “It all went very smoothly. They have been very happy with the service, and how the whole process was handled,” he said.

“A major refurbishment and a new build all in one venue is a major undertaking, but Stage Electrics, in particular Rob Beamer working together with our house Production Team has been an extremely positive experience for me as a client,” concluded Gail Wroth, Liverpool Philharmonic’s Head of Production.