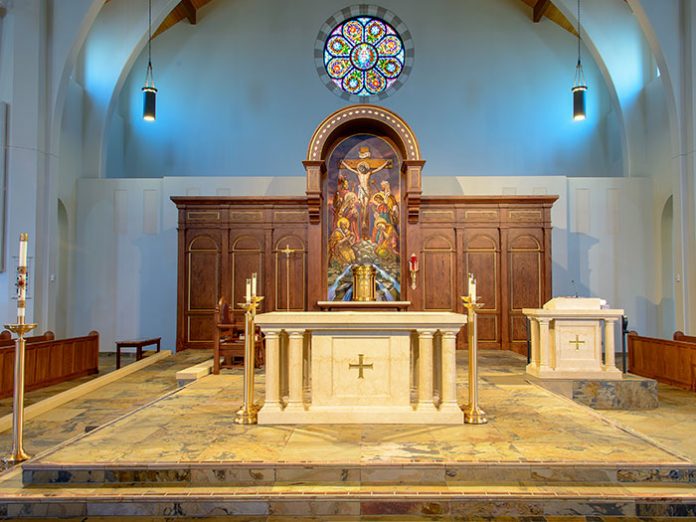 After a catastrophic F-5 tornado that devastated Joplin, Missouri, St. Mary’s Catholic Church was in need of a long awaited remodeling. Five years later, St. Mary’s new campus has been reborn, with a school, offices, and a 750-seat sanctuary that is nothing short of stunningly beautiful.
The cruciform shaped building boasts polished tile floors, soaring stained glass, and arched wooden ceilings that creates a rich acoustical environment for the choir and organ. However acoustical consultant David Walter of Diversified Design Group (Lincoln, NE) knew that those same acoustics would wreak havoc with spoken word intelligibility: “It’s a very, very reverberant space,” Walter states. “Addressing the issue with acoustical treatment is difficult and expensive, and far from aesthetically pleasing most of the time.”

Rick Massey of Total Electronics in Joplin, the installer on the project, agrees. “The acoustic characteristics of a traditional Catholic church like this one – high ceilings, hard reflective surfaces, parallel and perpendicular walls – creates an immensely challenging, reverberant space.”

Walter turned to Renkus-Heinz Iconyx Gen5 digitally steered arrays, prescribing a pair of Iconyx IC32-RN columns on either side of the chancel. “We’ve used the Iconyx arrays on a number of challenging projects,” Walter explains. “The ability to shift the acoustic center enables us to focus the sound directly toward the pews, and keep the energy off the back wall. It makes a tremendous difference in spoken word intelligibility.”

Walter points out that the IC32-RN columns provide more than adequate coverage. “In truth, a pair of IC24 or even IC16 would have covered the room,” he observes, “but using the IC32 columns gave us that pattern control down to the lower frequencies, which is the real challenge in a room this large and reverberant. The Iconyx system is also very musical, which is perfect since they wanted to add some more contemporary services to their traditional Catholic mass.”
Total Electronics AV project manager Nate Pugh says the Iconyx columns also worked well with the hall’s aesthetics. “Renkus-Heinz matched the paint color of the walls perfectly. If you don’t know they’re there, the speakers are easy to overlook; they really do blend in with the architecture.”
The final word comes from St. Mary’s Fr. Justin Monaghan: “These folks did an amazing job. It sounds wonderful, and now people can finally hear us.”