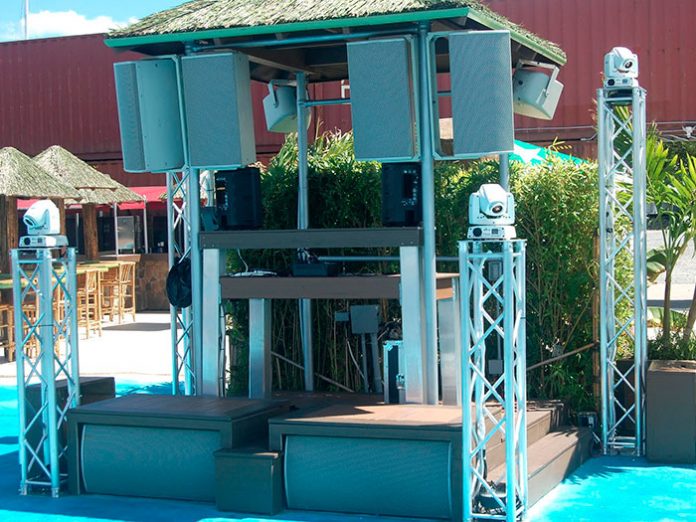 The Lost DayClub at Tiki Island is a large, outdoor dance club with a pool-party ambience based in Staten Island, NY, USA. Following a major renovation this year, the club has installed a new distributed audio system featuring Community R SERIES and I SERIES loudspeakers.

Lost DayClub’s system was designed and installed by Staten Islands JD Systems, Inc following a series of audio problems the club was facing, such as uneven coverage and complaints from neighbours.  “The loudspeakers were just thrown all over the place and nothing was delayed,” explains JD Systems’ Owner, Jak Daragiati. “It was a real mess… Tiki wanted to host events with well-known DJs, but the DJs refused to come because of the sound”.

Daragiati designed a new audio system using Community loudspeakers. “We chose Community.” Daragiati commented. “We knew it would stand up to the club’s seaside environment and give us great sound quality.”

At the club’s DJ booth, the new system features four weather-resistant Community IP6-1122 two-way, 12” loudspeakers supplemented by two IS6-215 dual 15” subwoofers. Sound is distributed evenly throughout the rest of the club by Community R SERIES R.35-3896 and R.15COAX loudspeakers. Crown XTI series amplifiers power the system which is managed by a BSS Blu-100 DSP and a Pioneer DJ mixer.

The renovation has been a big success for the Lost DayClub; no longer does the club receive complaints from neighbour or find it difficult to book great DJs to play for the ever-growing crowds.

“The vibe is completely different from past years.” Daragiati explains. “With this new system, Tiki took a space on the water and made it into a destination for crowds from New York City to New Jersey”