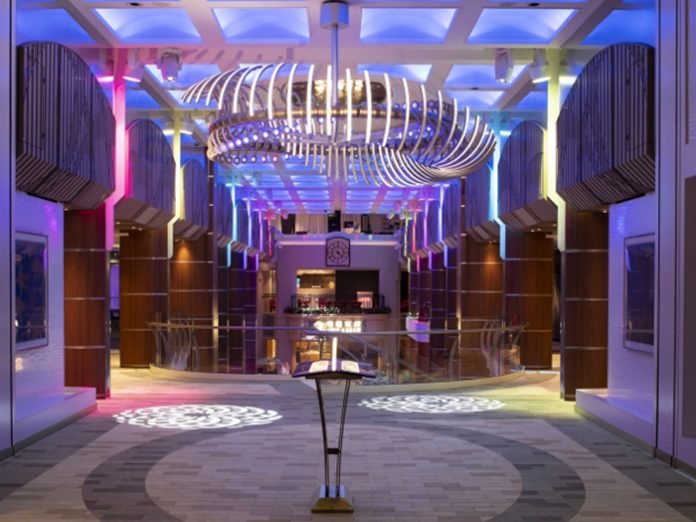 Built at Germany’s Meyer Werft shipyard, Amptown System Company (ASC) served as system integrator for sound, light, video, projection, media control and networking of media technology for the entertainment areas of the ship, working closely with the Royal Caribbean architects and technical team under the leadership of Royal Caribbean’s Superintendent SLVR & Architectural Lighting, Christopher Vlassopulos. Vlassopulos coordinated the design and specification for all the entertainment equipment in all three Quantum-class ships’ public spaces, including the entertainment lighting systems, and served the same role on Spectrum of the Seas.

Like the Quantum-class ships before her, Spectrum of the Seas is an environmentally friendly smartship with energy-efficient entertainment lighting systems. She boasts a similar lighting package template as the Quantum-class ships although with some updates and changes. “To keep up with the evolution of LED fixtures, the newest and most advanced technology has to be picked,” stated Malte Polli-Holstein, Vice President Maritime Business at ASC. “Therefore, with each new ship, we strive for cutting-edge technology when it comes to LED and moving lights.”

As cruise ships become more green, Malte says the pressure on the entertainment aspect to be more efficient is also constantly growing. “Therefore, LED equivalents are highly appreciated over discharge lamps,” he said. “Also the development of better-LED sources with a higher output and a more natural output (high CRI / TLCI) are forcing the change to LED. Last but not least, versatility is an important part of the requirement. The fixtures must provide a creative toolset to create new looks over and over, as all equipment won’t be exchanged for about a decade.”

With a host of intelligent lighting manufacturers to choose from, Malte says Amptown’s preference for Elation is driven by a variety of factors. “Elation is one of the most advanced companies when it comes to intelligent entertainment lighting and a complete solution,” he said. “From knowledge about the latest developments, sales, attractive prices to service and after-sales, everything runs smoothly in the partnership.”

When talking specifics about why Elation lights make them a good fit for cruise ships, Malte mentioned several factors like durability, quality and state-of-the-art technology, as well as the savings inherent in using LED fixtures, namely no additional costs for spare bulbs, storage of spare parts or manpower for lamp replacements. Additionally, the possibility to procure fixtures in custom white housings was also important. “Cruise ship architects love white ships and therefore we needed some white fixtures to unobtrusively integrate them into the interior design,” he said.

As a final note on LED savings, because LED lamps emit less heat, the air conditioning does not have to work as hard, which further reduces overall energy consumption on the ship. In fact, thanks to LED, major cruise ships today use only about a quarter of the energy compared to a luxury liner of 10 years ago.

The Elation LED lighting products to fit the smartship ethos perfectly with the main changes on Spectrum of the Seas compared to the earlier Quantum-class ships entailing updates to the latest fixture versions. In other areas, discharge lamp fixtures have been replaced with the corresponding LED models. Malte says, however, there are circumstances in which the update has been skipped, for example in custom positions and/or recesses where a change would bring about unwanted architectural modifications.

Elation lighting is used to visually enhance many of the ship’s main entertainment and relaxation areas. Elation lighting features in the ship’s Music Hall, a two-story multi-use entertainment space where guests can enjoy a range of activities and live performances. Accommodating around 400 guests, an Elation rig of Platinum Spot III and Platinum SEVEN LED moving heads, along with Colour Chorus 24 LED battens and Protron 3K LED strobes, is capable of accommodating any event. In Two70, the ship’s multifunctional multi-story entertainment space, ASC has upgraded the lighting of the signature Vistarama – 270-degree panoramic windows that transform into a huge projection surface – from ELAR Quad Bars to SixBar 500 LED battens.

In the Royal Esplanade, a multi-level thoroughfare lined with boutiques, clubs, restaurants and bars that runs along the length of the ship, Platinum Spot III and Fuze Wash Z350 LED moving heads in discreet white housings provide mood lighting effects and are used each night for shows and special events. Meanwhile, in the Bionic Bar, where robotic bartenders mix drinks, Pixel Bar LED strip lights adorn the space in decorative colour.

In one of the ship’s more popular active areas, SeaPlex, multipurpose sports and entertainment space used every hour of the day, Elation Fuze Wash Z350 and Platinum Spot LED Pro III moving heads provide colour and pattern for both sporting and entertainment events. Here, LED is again important as the fixtures are in constant use and the hassle and cost of regular lamps replacements have been eliminated.

Speciality architectural effect lighting has been incorporated into several of the ship’s outdoor areas including the pool, crew and sports decks where Elation marine-grade SixPar series LED Par fixtures, immune to saltwater, heat and humidity, not to mention the cleaning crew’s hose, light up the decks in the evening hours in vibrant colour.

With Shanghai as a homeport for Spectrum of the Seas from June 2019, Royal Caribbean is primed to take advantage of Chinese travellers’ flourishing desire to cruise in what is expected to eventually become the largest cruise market in the world.