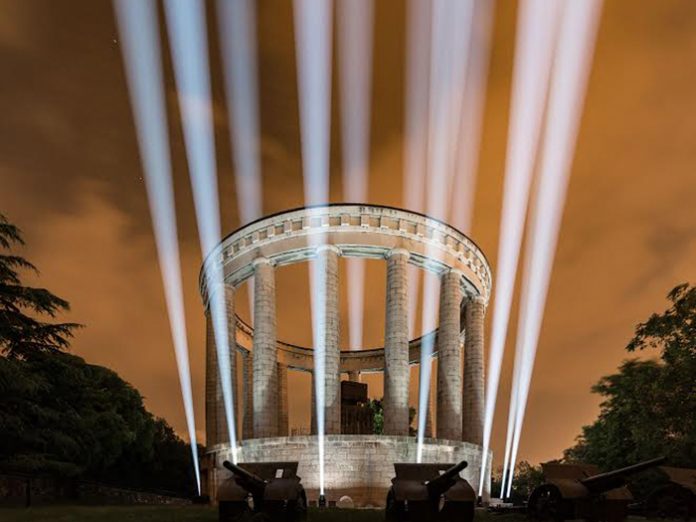 Twelve Robe BMFL WashBeams were utilised by artist and lighting designer Mariano de Tassis in a breath-taking and unique installation at the mausoleum of Italian patriot and Irredentist Cesare Battisti in Trento, Italy.

The installation was produced by Filmwork Factory to celebrate the centenary of the death of Battisti. The original idea of highlighting the mausoleum with 12 powerful beams shooting up into the night sky to match the 12 columns of the monument was Mariano’s himself, pitched to the Municipality of Trento. He commissioned photographer Pierluigi Cattani Faggion to document the work.

The mausoleum is located on the top of Doss Hill in Trento and was designed by architect Ettore Fagiuoli and inaugurated in 1935. Its 12 columns are 15 metres high and follow a circumference of 75 metres. It is visible from all over the city and surrounding countryside.

The BMFLs were placed around the perimeter, each corresponding to one of the columns and pointing directly upwards – no movement, no gobos – creating the intense columns of light.

“The light beams created a new three dimensional aspect that was solid yet ephemeral for the timeframe of the installation and related to the architecture,” Mariano explained. The installation was momentary. It was active for just three hours between 9 and 12 midnight on 12th July, the day of the anniversary, evoking and recalling an actual historical event.

Mariano has used Robe products in his work for some time, but this was the first time he’d employed the BMFL WashBeam. As soon as he saw the fixture demonstrated by Robe’s Italian distributor, RM Multimedia, he knew it had the “power and the beauty” as well as the high CRI he needed to realise his vision. The most challenging and enjoyable element of this work was the ‘surprise’.

In order not to reveal anything beforehand, no trails were made in situ, so the first time Mariano actually saw the concept at work was on the day as the installation went live, when he and large numbers of the public – as the news spread – enjoyed the transitioning of the columns of light … as the sky went from dusk to full darkness.

The BMFL WashBeams were supplied by Musical Box Rent from Verona. They were programmed by Matthew Oliva, and the event’s production manager was Claudio Paolazzi.

The event was a ‘pilot’, the first of a series of innovative visual arts projects planned insignificant historical locations around Italy, a new experimental art-form that can mark events, engage the public and evoke new ideas about history and memories. More generally, these interventions can focus on human traces that are now part of the landscape.