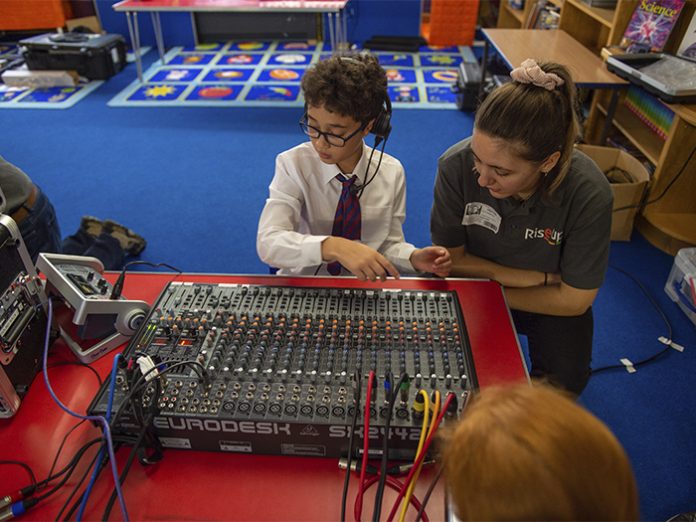 Producing a television show in one day is fairly routine, but when the technical teams are made up of 10- and 11-year-old schoolchildren whose only prior TV experience is deciding what to watch, it gets a bit more challenging.

That’s what the Rise organisation, Clear-Com and key broadcast industry sponsors BT Sport and ITV recently experienced when they hosted the latest in an ongoing series of unique TV production workshops, but the results were more rewarding than any ratings win or commercial success.

Rise is an advocacy group promoting gender diversity, education and awareness of science, technology, engineering and math (STEM) topics, especially within the broadcast industry. Since its inception in 2017, the organization has run mentoring programs, networking events, seminars and conferences, often collaborating with universities and industry partners to address the widely acknowledged shortfall of new talent – female and male – in primarily engineering and technical operational roles.

In 2019, Rise led a broadcast industry roundtable to discuss new ways of approaching talent recruitment and encouraging students to consider engineering and technical roles as potential career paths. One result was the “Rise Up” series of workshops designed to give students hands-on experience with broadcast technologies while working alongside industry professionals.

The first workshops were held shortly after, with another recently completed in early March. Each followed a similar format: produce a quiz show-style program in one day, using middle-school students as the technical and creative staff. For John Sparrow, EMEA Senior Systems Consultant at Clear-Com, the March workshop was his second experience supporting the Rise Up program with a communications system provided by Clear-Com, and he found the process both fascinating and gratifying.

“The students were silent at the beginning of the day, filing in orderly and taking their seats,” he said. “Then, a buzz of chatter and excitement led to utter chaos that evolved into real teamwork. They all got through it and by the end of the day their shared sense of achievement was amazing to see.”

The day began with an introduction to the basics of television production, presented by Rise Up team leader Andy Beale of BT Sport who covered TV video and audio transmission including pixels and color, show direction, camera operations, graphics, audio, lighting, visual effects and communications. Next, the students were divided into groups led by a volunteer from the industry and they were told to find the equipment and cable it together.

The morning session was dedicated to building a studio and setting up the quiz show’s production workflow. After a lunch break, the teams focused on rehearsals, script revisions, commercial breaks and every other element of a TV production, with the students rotating so everyone would have a turn at learning a new role.

“It’s quite intense, but also a lot of fun,” John said. “We take them through the whole process step by step. It’s less about actually producing TV content and more about helping the students learn, giving them confidence, providing a hands-on experience with engineering and exposing them to a potential career path they might not have otherwise considered.”

Rise plans to continue the workshop series at schools throughout the U.K., and then expand the program to other countries. New groups of industry professionals will be continually trained as team leaders, furthering the original Rise goal of mentoring and fostering relationships between industry professionals and students that can last throughout a career or lifetime – with the mentees one day becoming mentors to others.

“That’s ideally where we’d love to take it,” said Nicki Fisher, Sales Director at Clear-Com and a Board Member of Rise. “Many of the professionals participating in this program would have loved to have had a mentor when they were beginning their careers, but there simply wasn’t anything like this that existed then. I look back at my early education and remember the first time I picked up an oscilloscope on the physics bench and the impact it had in terms of giving me some direction about what I wanted to do. I’ve also been a Rise mentor, so I’ve got real insight into what you can gain from the program and what workshops like these can deliver for a student deciding on a career.”

Fisher added the workshops have led to Rise team members and the students’ parents staying in touch after the events, so the experience can continue after the cameras stop, with further follow-up activity and events being conducted. The program is also exposing the potential benefits of engineering and technology to a diverse set of students.

“Some of the participating children may be academically challenged or have certain learning difficulties, but the STEM topics covered in these workshops are a perfect fit for their natural and creative abilities,” said Fisher. “Their teachers have told us, ‘In these environments, they have absolutely shone.’ Quite often at this age people dismiss these types of subjects, mainly because they don’t actually know they can lead to a career.”

In addition to Clear-Com, BT Sport and ITV, other companies providing their technology and expertise for the Rise Up workshops include Sky, Telegenic OB, dB Broadcast, Timeline TV and Blackmagic, as well as many freelance volunteers. For example, Clear-Com has built a modular communications kit built around its HelixNet digital networked partyline intercom system that can be easily packed and shipped from one event to the next.

“Clear-Com’s kind contribution of a comms kit, as well as staff members to support these workshops, has meant that young children are gaining a full understanding of how broadcast studios are set-up and work in live environments,” said Carrie Wootten, Rise Managing Director. “We’re really looking forward to continuing this work with Clear-Com to inspire, inform and educate children across the U.K. about the broadcast technology industry.”