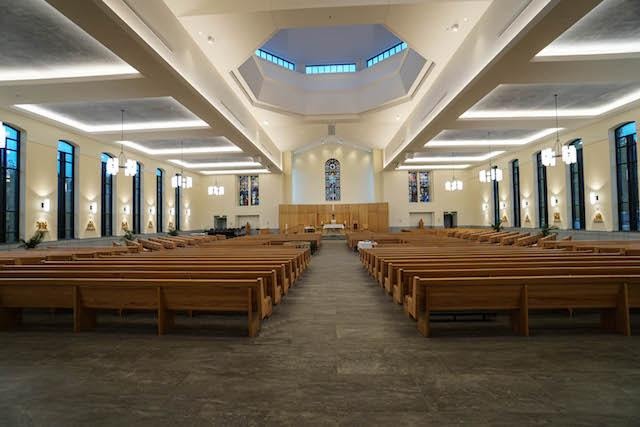 St. Mary Magdalene Parish’s first mass was held at the Apex Middle School in 1999, and until recently, the school gymnasium remained the congregation’s makeshift sanctuary. While grateful to its host, the congregation needed a home of its own. At last, after two years of construction, the lovely new St. Mary Magdalene Catholic Church opened its doors this year, welcoming a capacity crowd of about 1,450 congregants. To worshippers’ delight, every word spoken from the pulpit and every note performed by the band and choir could be clearly heard, thanks to a new Renkus-Heinz ICONYX IC2 sound system designed and installed by Cary, North Carolina, design/build AV systems integration firm AVCON Inc.

The sanctuary features 30-foot-high ceilings, granite walls, plenty of stained glass windows, tile floors and other hard surfaces. Although not as ‘live’ as many classic cathedrals and older churches, it has plenty of reverberation and the potential for sonic mayhem if the sound were not properly managed. The church has transepts as well, so covering the entire sanctuary required multiple loudspeakers.

Services are a blend of contemporary worship, with electric and electronic instruments and traditional worship, featuring a variety of acoustic instruments (except drums) also capable of housing anywhere from 4 to 35 singers. Delivering clear, intelligible speech as well as acoustic and amplified music in such a space was a major challenge. With a beautiful new building, aesthetics were another major consideration in selecting and placing loudspeakers.

“We required a steerable loudspeaker that could focus energy on the floor whilst keeping it off the walls and ceilings, delivering high speech intelligibility, as well as good music playback,” begins AVCON design engineer Eb Strickland. “The Renkus-Heinz IC2 provided all of that. We have used ICONYX loudspeakers before but this was our first use of the IC2, and we were very pleased with it. Renkus-Heinz column line arrays on the walls might have worked in the space but we could not find places to mount them. We needed a loudspeaker with a small form factor so it wouldn’t be obtrusive hanging from the ceiling. The IC2 is quite compact, and Renkus-Heinz custom painted them to match the décor. Up in the ceiling, they’re out of sight and out of mind.”

AVCON installed six IC2s in St. Mary Magdalene Church’s sanctuary. “We have two in the centre that cover the main seating and the nave, from the front all the way back to the hall,” recounts Eb. “Then we have left and right corner arrays that cover the sides and far left and far right speakers to cover the transepts.” “There’s always a fine line between trying to maintain a traditional worship space with high reverberation and having clarity of speech,” adds AVCON founder, president, and CEO Frank Yarborough. “That creates a conflict, almost a contradiction, in the approach. In a space like this, you have beautiful reverberation and warmth, kind of like singing in the shower. People love that feel of openness and airiness. But intelligibility is an issue.”

Frank adds that hearing speech clearly can be challenging to begin with because the Catholic Church enjoys a multicultural range of priests, bishops, and others who often speak different dialects, making it difficult for some parishioners to hear and understand. “Add to that the acoustical challenges of a big, majestic space,” he posits. “Renkus-Heinz ICONYX loudspeakers provide excellent clarity, as well as the directivity and control needed to keep the sound on the congregants and off of walls, ceilings, and other hard surfaces. The custom-painted IC2s don’t conflict with the beauty of the worship space, and they complement the room with their technology.”

So far, the Renkus-Heinz system has been every bit as successful as the AVCON team expected. “We’re really well pleased with the IC2’s coverage, performance, and clarity,” Eb praises. “Being able to focus energy on the floors and keep it off the ceilings and walls is extremely important in an environment like this, with the reverberation as high as it is.”

The system even exceeded church sound engineer Scott Todd’s expectations. “At first, I was not optimistic when AVCON wanted to put a bunch of speakers up in the ceiling, 30-feet up in the air, with granite walls and lots of glass and other hard surfaces,” Scott recalls. “But after working with the Renkus-Heinz sound system in the church for weeks, I am very impressed. The way AVCON set the system up, it sounds great, and you get an almost identical sound no matter where you are in the room. The speakers steer the sound where it’s supposed to be, which helps us keep the volume and reverberation at the right level. We’ve been extremely pleased with how everything has come together.”