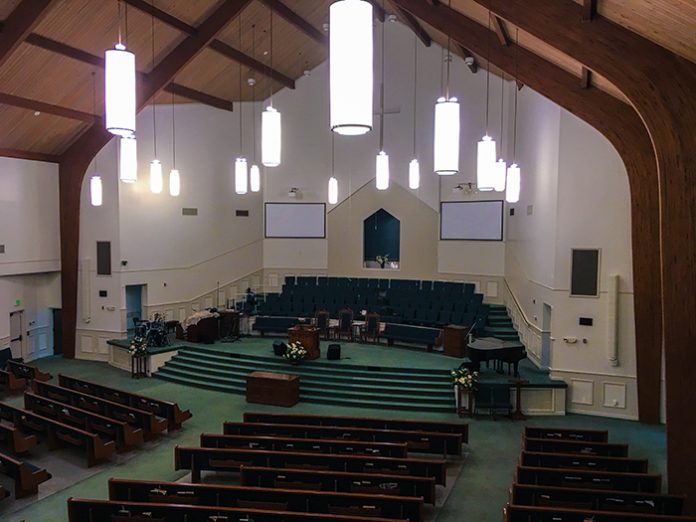 For years, Antioch Baptist Church got by with a sound system consisting of three ageing loudspeakers spread along each side of the sanctuary and two front-facing fills in the rear of the room, with no offset delays or other processing.

“The sanctuary is roughly fan-shaped, dangling from the front to the back at about 20 degrees,” Moffitt Technology Lead Technician Jeff Allen reported. “The old sound system wasn’t what they needed but the acoustics are not bad. The only thing we thought might give us trouble was the facing of the rear balcony. But with Renkus-Heinz beam steering, we were able to steer and tune the speakers to where we had hardly any bounce off the balcony.”

Moffitt was sold on Renkus-Heinz IC Live before the Antioch Baptist Church project, although the firm had limited hands-on experience with Renkus-Heinz loudspeakers. “We redid an auditorium at an Air Force base downtown, and Renkus-Heinz IC Live was spec’d in,” Jeff recalled. “When I heard that system, I fell in love with it. It just sounded awesome! Then I got Richard Hembree of Griffith Sales to come down and demo Renkus-Heinz IC Live for a couple of churches, and it sounded so much better than what they had that I kept IC Live in mind.”

In making their recommendations, Jeff considered the type of services at Antioch Baptist Church, as well as the acoustics. “Their services use choir and organ but also keyboards and drums, so the sound system needs enough clean power for music reinforcement, as well as speech,” Allen relates. “The sanctuary doesn’t have acoustic conditioning, and it has that balcony, so beam steering to direct the sound to the people and away from reflective surfaces makes the difference. I knew IC Live was what they needed.”

The Moffitt Technology team worked with church leaders for a year before installing the new sound system. “We stood by what we told them they needed,” recalled Jeff. “We told them we could put in a cheaper system but they wouldn’t be happy with it, and it was worth spending the money to get the right system. They agreed, and we put in a system that works great for them.”

A Lab.gruppen D80:4 amplifier processes and powers the Renkus-Heinz subwoofers, down fills, stair step speakers, and floor wedges and serves as a Dante “on ramp” for the self-powered IC-FR-DUAL main arrays. The Moffitt team chose a Dante-enabled Biamp Tesira-series DSP to manage the system, and the church continues to use its existing analog console.

“The new IC Live system at Antioch Baptist Church sounds awesome,” proclaims Allen. “They are very happy, and it appears we got everything right. I told them if they ever had a problem, don’t hesitate to call. I haven’t had a call yet.” “Moffitt did a great job,” praises Antioch Baptist Church Deacon and Minister of Music John Gibbs. “They were very professional and got it accomplished in a short period of time. The Moffitt staff were very pleasant to work with, and everyone at the church is very pleased with the system that was installed”.