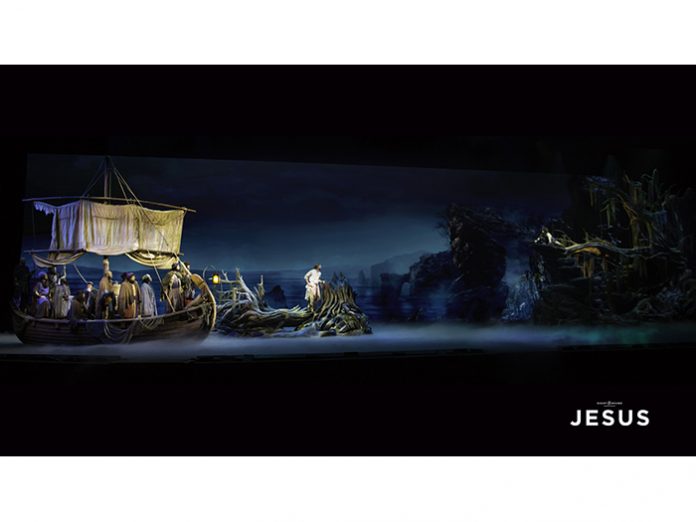 For over 40 years, Sight & Sound Theatres have been bringing the bible to life for the American public through their live and epic-scale biblical productions.

Founded by Glenn and Shirley Eshelman in 1976, what started off as fairly simple multimedia storytelling has evolved into the state-of-the-art immersive theatre that sees more than a million people through the doors each year and is now billed as “the largest faith-based live theatre in America”.

For 2018’s production, Jesus, which launched on the vast 92-metre wraparound stage of the company’s 2,000-seater Lancaster County, Pennsylvania venue, Sight and Sound added an extra layer of vitality and sentience to its story-telling with the introduction of TiMax spatial reinforcement and immersive audio.

Gary Parke, audio integrator for Sight & Sound, first evaluated the capabilities of TiMax on a production last year. Proving itself an invaluable remedial and creative tool, its versatile immersive audio resources are now central to the soundscape of the new Jesus show, where strategic sound design is key for the sizeable auditorium.

“The timeline features and controlling the image definitions for our actors is a big benefit. TiMax has given us much greater flexibility in controlling the actors’ mics in relation to their stage zones. Currently, we are using timecode triggered cues on TiMax to move the different mic groups or channels to the different zones as the actors move around the stage,” Gary explained.

Demonstrating the scale of the production, seventy channels of wireless microphones worn by the actors are fed via Dante from a Studer Vista console to the 64-channel TiMax SoundHub, either direct or as groups. TiMax Cues dynamically morph them between spatial image definition objects via the distributed house sound system, comprised of four hangs of QSC Wideline 10 with four Clair Brothers C8-i line arrays for the side surrounds and a further 27 full range speakers for overheads. Sub support is provided by a central cardioid array centre house of eight Clair CS218s with four EAW SB1000s positioned front on the stage floor. Fill for the front and side stages is delivered via 26 EAW JF80s with six EAW full range speakers managing the rear surround on the main floor with a further four full range speakers attending to the raised seating area.

Due to the size of the venue, creating an even stage panorama soundscape for the entire audience had always been problematic, but Gary stated: “TiMax has given us greater control and flexibility in setting up the image definitions for our many fill speakers. This allows for better vocal imaging for more patrons instead of just those in the main array coverage. Without TiMax, we wouldn’t have the detailed control necessary to get the vocals to image as well on the fill systems, with the proper delays.”

Such seamless vocal imaging and movement ensures all Jesus audience members remain fully immersed and engaged – despite the stage surrounding them on three sides and sets that can reach up to four storeys in height. Extra credibility and enhancement are injected into the show’s shifting mise-en-scene with fully enveloping 3D ambience effects, with playback from both QLab and TiMax dynamically spatialised by TiMax with cues triggered from timecode.

Sight and Sound’s productions are developed on a huge scale. Getting from initial concept to opening day on the two-and-a-half-hour shows takes 42 months, with almost everything done in-house, from story development to costume design and choreography. Unsurprisingly and to gain the maximum value, every production that premieres at the Lancaster venue are also designed to travel to its sister theatre in Branson, Missouri to run the following season.

The audio system at the Missouri venue is as far as possible a duplicated version of the first venue. This ensures show audio content and programming files can be sent on ready to mount the new production to ensure the simplest show transfer. For this reason, Sight and Sound have invested in a second TiMax SoundHub-S64 for the Branson venue.

For further ease and to ensure the smoothest running of the productions, which always involve sizeable and busy casts – often including live animals – Sight and Sound have also just invested in a TiMax Tracker performer tracking system for the next production going into the Pennsylvania venue, with plans to also duplicate this soon afterwards in Missouri.

Speaking about the overall integration of TiMax into the production audio, Gary said:  “It’s been a very positive experience and we look forward to upgrading our Branson facility with TiMax this summer as well. We’ve found the ease of programming and flexibility were a big benefit to using TiMax. The timeline is fantastic with a visual overview of the show programming; it makes it much easier to program the show.”