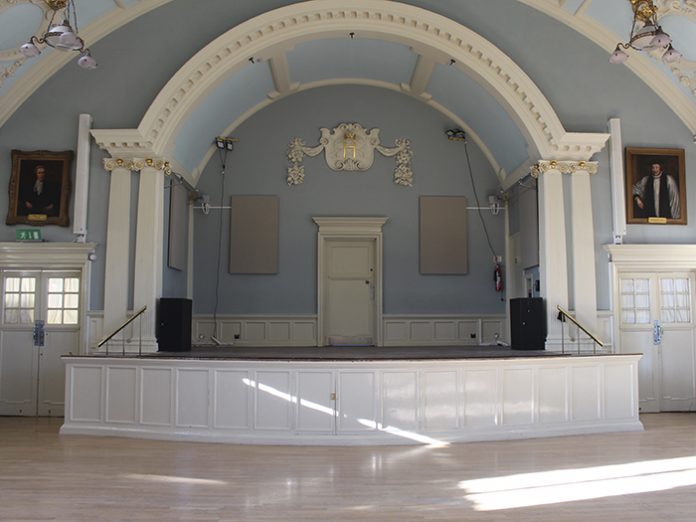 Henley Town Hall, an imposing Grade 2 listed building, sits in the centre of the famous Oxfordshire market town and is administered by Henley-on-Thames Town Council. Whilst it is in regular use for council business, its principal spaces are also used for a variety of functions, ranging from weddings, civil ceremonies and concerts to meetings, classes and trade fairs. Completed in 1901, the Town Hall is characterised by a number of period features which contribute to its attractiveness as a sought-after venue – one which recently took stock of its audiovisual provision and came to the conclusion that significant improvements were needed.

The venue’s arch-roofed, second-floor main hall is a highly reverberant space – in fact even by heritage listed building standards, the acoustics are extremely challenging. Existing acoustic panelling in the hall had been supplemented with additional provision but its beneficial effects were still rather limited. The audio system in situ was not only outdated and inadequate but constituted something of a black box eyesore amongst such opulent surroundings. Whilst it was of fundamental importance that the audio in the room was vastly improved, further consideration was that any new system should, as far as possible, complement the aesthetic of the space. Other requirements included a suitable DSP control system with external inputs for visiting sound desks or media players, as well as two channels of handheld wireless microphone provision.

Town Clerk, Janet Wheeler, appointed Audiotek Ltd as consultants and the company arranged a number of onsite demonstrations to compare the potential of different systems to overcome the challenge. Three systems were trialled. Each demonstration took place with the hall completely empty and with a full complement of chairs. The latter scenario would naturally reduce the reverberant nature of the room and thus enable an extra comparative criteria to be factored into the calculations. The first two systems were demonstrated in this way. The third system comprised of Renkus Heinz Iconyx IC16 speakers paired with PN212 subs. After the first trial in the empty hall, it was not necessary to introduce the chairs. The measurements delivered by the Renkus Heinz system in the empty hall exceeded the best results (by more than 15%) obtained from the other systems achieved when the hall was furnished with chairs. Audiotek put the project out to competitive tender specifying the Iconyx speakers and Henley Theatre Services won the contract to install the system and in turn, consulted with POLAR over a number of aspects of the work.

Renkus-Heinz Iconyx IC16 speakers are beam-steerable, sophisticated, compact, powerful and discreet units which allow up to eight steerable audio beams to be individually shaped and aimed to tailor performance for the requirements of a specific space. Each ICONYX module controls its own built-in digital processor and amplifier, covering an audience in a way that could not be achieved using conventional technology. The ICONYX speaker places sound only where it is required, avoiding reflective surfaces that create problems. Not only does the ICONYX range deliver exceptional performance in challenging spaces where intelligibility is problematical but its profile also blends seamlessly into the background, giving it another huge advantage in heritage spaces that are being used for contemporary applications.

Two x IC 16-RD speakers in white were placed at the front of the hall with a pair of (removable) PN212 subs mounted on the stage. The sleek profile of the ICONYX allowed them to blend into their surroundings, delivering a much improved aesthetic in comparison to the previous system. A Biamp TesiraFORTE DAN AI digital audio server with 12 analogue inputs, eight analogue outputs and Dante digital audio was installed to control all audio processing, including signal routing, mixing, filtering, eq and delay. A wall-mounted Biamp TEC-1s controls the system, which supports external sources such as visiting mixing desk, tablet and media player, as well as 2 channels of wireless microphone provision. This came in the shape of a Beyerdynamic TG500 wireless system with dual receiver and two TG500H-D transmitters with TG V50 dynamic capsules. The TG500 system is the perfect wireless solution for presentations in a medium sized setting such as this.

Reg Berry, Projects and Sales Director at Henley Theatre Services commented: “The new system is excellent and the client is really pleased, both from an operational point of view and in terms of audio quality – the new systems have really improved things beyond all recognition. POLAR was a great help during the project, offering telephone support, product demonstrations and regular consultation throughout.”

Mark Bromfield, Business Development Manager at POLAR Integrated Solutions added: “It was a pleasure to work with Reg and his team at Henley. In what is a sensitive, heritage space they delivered a thoroughly professional service from start to finish. Our technical support engineer, Jason Spooner, who commissioned the system, was hugely impressed by their work, observing that his job had been made much easier by the installer’s careful attention to detail. The client is very happy with the audio transformation that has taken place – once again Renkus Heinz Iconyx have proved to be invaluable in overcoming the difficulties that regularly present themselves in such venues. The Biamp DSP provides a straightforward, intuitive control system and the Beyerdynamic wireless systems meet every requirement in an extremely competitive package. Henley Town Hall’s viability as a multi-function space has been significantly enhanced by this project and POLAR is delighted to have been involved in helping to deliver another successful outcome.”