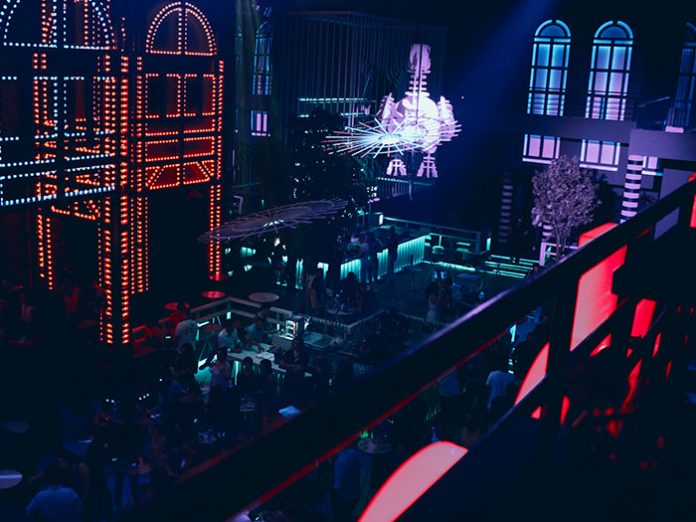 After an extensive refurbishment, Folie Terrace, the largest nightclub in Albania by capacity, has reopened with several new features including a retractable roof and a new lighting, video and audio solution provided by Harman Professional. Developed and installed by Albanian Harman Distributor, Prosound, the refurbishment comprises of a brand new interior, including over 5,150 lighting and video components from Harman’s Martin Professional and a complete sound system from JBL Professional.

With a capacity of 1,500 people, Folie Terrace is one of the largest and most popular nightclub / live music venues in the Albanian capital city of Tirana. One of the club’s special features is a retractable roof, which can convert the club into an open space or close it off to contain the noise levels to adhere to downtown Tirana’s strict noise ordinances. In early 2015, Prosound was contacted by Folie Terrace’s owner, Andro Buxhuku who showed the team the initial drawings for the club’s renovations that emulated the city lights with linear dots.

The initial project drawings featured 1,000 incandescent lamps with heavy dimmers. Although the Prosound team was excited about the general idea of the design, they anticipated a cabling nightmare and a complicated setup with endless amounts of DMX addresses as well as an enormous power consumption. As an alternative to the incandescent light sources, the Prosound team suggested Martin Professional’s creative LED video dots and immediately set up a demo with the VC-Dot 1 fixtures. Buxhuku was thrilled at the prospect of being able to create more advanced effects using the Martin P3-PC System Controller, with the added benefit of RGB colours, while also drastically reducing power consumption.

“We chose these LED dots particularly due to their brightness and low power consumption,” said Kliton Gjika, Managing Director of Prosound. “They needed to be able to stand up against the club lights and other visual elements and they manage perfectly. Secondly, the dots are individually controllable and easy to map and configure.”

The entire wall behind the DJ/Stage is covered in 5,150 VC-Dot 1s mounted on a wooden frame in the shape of a building facade. The VC-Dots create an outline of windows and a building facade, creating a nice backdrop for the performances on stage and the dance floor while the Martin P3-PC System Controller controls the entire system. Initially, Prosound wanted to use the VC-Dot 9 Diffuser Spheres but to increase the output a smaller custom-made diffuser sphere was made, which emitted the desired output while at the same time emulating the incandescent light sources.

Folie Terrace also has a house rig of eight Martin MAC 101s, eight RUSH MH 4s, eight RUSH MH1s and six RUSH DC 1 Aqua fixtures that simulate the effect of water on the floor at the centre of the club – all controlled by Martin’s M1 lighting console.

According to Andro, any club owner’s greatest concern is to ensure customers are happy and lighting is a critical component to creating an enjoyable atmosphere. HE said: “It is important for me that the lighting sends a message. It needs to signal exclusivity and it needs to make my customers feel happy and relaxed. To us lighting is just as important as other parts of the interior and it needs to work with the interior to create a cohesive guest experiences.”

Martin’s Design & Application team travelled to Albania to assist the Prosound team on-site and to train Folie Terrace’s staff to achieve optimum performance of the system’s capabilities. “It’s great that Martin Professional was part of the post-installation phase as well. When our guys learn all there is to know about the system, we will be able to create more sophisticated and interesting looks,” said Andro. “I am sure that our lighting system will become one of the main components in Folie Terrace’s visual identity.”