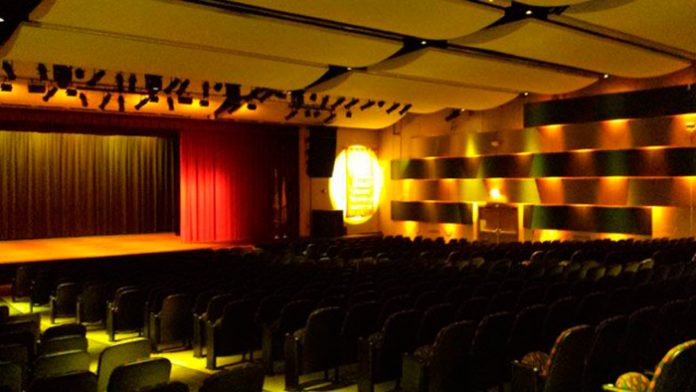 Located in Wayne, NJ, the Passaic County Technical Institute (PCTI) is a national award-winning high school with a 200 course curriculum which includes their School of Performing Arts. With a focus on the student’s artistic development in preparation for life after graduation, the PCTI theatre recently underwent a systems renovation highlighted by the desire to immerse the audience into each performance. To complete the project, Thea & Schoen was brought on as the systems integrator and they designed an energy-efficient Philips Strand Lighting retrofit installation that included PLFRESNEL1 and PLPROFILE4 LED luminaires along with a NEO lighting control console, Vision.net Touchscreens, an A21 Dimming System, and CD80SV Retrofit Dimmer Modules.

“We were originally brought into the project by Generations Electric who works on energy co-ops with a lot of schools in the area,” stated Wes Hacking, Systems Designer with Thea & Schoen. “The initial focus of the installation was an LED upgrade to the house lighting because the school wanted to be able to bring the performances out into the house. After our first meetings about how we could accomplish this, they started to get excited about a more complete renovation and the whole project really opened up from there.”

First turning their attention to the house lights, Hacking needed to replace the current incandescent pendant lights that hung over the aisles. Looking at how the new lighting instruments could be hung, he came up with a unique solution that included 28 PLFRESNEL1 LED luminaires.

“When we started looking at more energy-efficient house light options, I brought in the PL Series LED luminaires for a demo,” explained Wes. “I showed them the PLFRESNEL1 as a possible option and when they saw how they could bring colour-changing into the house, they loved the idea and were blown away. We were then able to flush-mount the LED luminaires into the ceiling and replace their existing 300W house lights in a 1-to-1 ratio with the PLFRESNEL1 LED luminaires.”

The PLFRESNEL1 LED luminaire is renowned for its colour rendering across the colour spectrum, and also for its warm and cool whites. Delivering an adjustable beam with a soft edge that is easily blended with adjacent beams to provide an even wash across a stage, the PLFRESNEL1 creates no irritating colour shadows, ensuring the fixtures are ideal for theatre, small studio, and display lighting applications.

“After the discussions about house lights, we began discussing what their other needs were and what else they might like do,” continued Wes. “When they mentioned an easy and convenient way to call-up preprogrammed looks in the theatre for assemblies and other events, I showed them the Vision.net touchscreen and they loved the functionality it provides. So by installing one touchscreen backstage and another in a front of house location, they can now pull-up a variety of lighting looks with the simple touch of a button.”

The Vision.net control system is a fully integrated lighting management system designed to meet the most demanding lighting environments. Scalable from a single room to large multi-building campuses, its decentralised control approach delivers unparalleled flexibility and maximum reliability. Vision.net control stations provide a wide range of touchscreen, button and slider stations and any button can be programmed with a multitude of functions.

“Next, we started talking about the banners inside the auditorium that they currently had lit with only white light,” added Wes. “For this, I showed them the PLPROFILE4 LED luminaire which they also loved so we added two of them to the project as well.”

The PLPROFILE4 LED luminaire is an innovative combination of LED source technology and precision optical design, that expands the family of PL Series lighting fixtures and uses four high-power, RGBW LED chips to deliver endless colour options along with precise beam control and pattern projections to give lighting designers everything they desire in a powerful and compact spot luminaire.

“With the new Vision.net touch screens and the PL Series LED fixtures we now needed to address the dimming capabilities,” admitted Wes. “There was an existing Strand CD80 dimming system in the theatre, so we switched out the CD80 dimmers for CD80SV retrofit modules, upgraded the control card to be compatible with Vision.net, and then added an A21 Dimming System with nine 2000W IGBT Dimmer Modules.”

A21 Dimming Systems are designed to be tailored to the varying needs of architectural or entertainment applications, and their modular design allows systems to be easily configured to meet the needs of a wide range of projects. CD80SV retrofit dimmer modules have been designed specifically to upgrade existing CD80 dimmer racks using IGBT dimming and switching technology to expand LED dimming capabilities.

“After addressing the dimming upgrade, we then started looking at their existing lighting control console,” said Wes. “They currently had a Light Palette, but were open to new options as well. When I showed them a demo of the new NEO lighting control console they got very excited about its touchscreen capabilities, the magic sheets and its pixel mapping features. With a very easy-to-use interface and its control language made for the programmer, they wanted a NEO so we added it as the final piece to the complete Philips Strand Lighting package.”

The NEO lighting control console marks a new chapter in the evolution of control from Philips Strand Lighting giving operators the ability to grab, move, change colour and motivate the lighting design simply and effectively through the inclusion of many timesaving features. Icons and Shutter controls are represented graphically on the display and Floating Windows allow the operator to configure their views their way making it easy to find information. Effects are also revolutionised with Time Line features allowing drag and drop to create that perfectly timed sequence, making NEO one of the most robust consoles available today.

“Besides the PCTI productions, the theatre also operates as a rental house for other organisations in the area,” concluded Wes. “With this system retrofit, which also included Philips Colour Kinetics iColour MR fixtures in the curved wall coves throughout the house, the production space has now become an all-encompassing and immersive live entertainment environment, which is exactly what they wanted. Bringing the emotion from the stage to the house, productions can blanket the audience in virtually any colour and the system from Philips Strand Lighting is working wonderfully.”