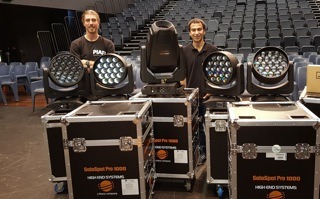 South Perth’s Wesley College has been shaping young minds since 1923. Its Goatcher Auditorium, seating more than 300 has been serving the College’s needs since opening in 2008 and after nine years of constant use it was time to refresh the lighting system and upgrade to LED. Alex Spartalis, Head of Lighting for the college, helped the school to install four High End Systems SolaSpot Pro 1000s and four Elation Platinum Sevens giving them their first moving lights and first LED sources.

“I’ve used the SolaSpot Pro 1500s and was really happy with them,” said Alex. “They were too big for this use case as the school needs fixtures that are a one-person lift. I was just as happy with the smaller SolaSpot Pro 1000s, they have good colour mixing, a good zoom and they run extremely quietly, if not silently. They’ve got the output and colour the College needs and it’s great to move away from lamps in a school environment because of the maintenance issues.”

With the profiles sorted, Alex turned to the wash. “I’ve used Elation’s Sixpars and found them to be great products,” Alex continued. “The College wanted a really bright, affordable wash with really good colour mixing so they decided to install four Elation Platinum Sevens. They have a great zoom range to cover the Goatcher Auditorium’s relatively large stage, and the UV is a great bonus. The kids always want to use UV effects and previously we’d hire in 400W UV canons on a case-by-case basis, so it’s nice to not have to do that anymore.”

Alex rigged and installed the lights in a day, running power and data at the same time but the fixtures won’t always be above the stage. “The SolaSpots are on the front bar and the Platinum Sevens on the middle bar but they roam around as well,” explained Alex. “Wesley College runs events in different spaces around the campus, for example, the end-of-year graduation is on the oval so we intend to use them to service those events too.”

Both the SolaSpot Pro 1000s and Elation Platinum Sevens were provided by local dealer Evolution 512, Perth’s one-stop production equipment supplier, helmed by Sean McKernan. Evolution 512 are a Platinum Reseller for Lexair, Australia and New Zealand Elation and High End Systems distributor. Like other high-profile installs in Perth such as the Perth Concert Hall and Crown Casino, Wesley College will enjoy unparalleled support and service for their fixtures from Lexair for the duration of their working life.