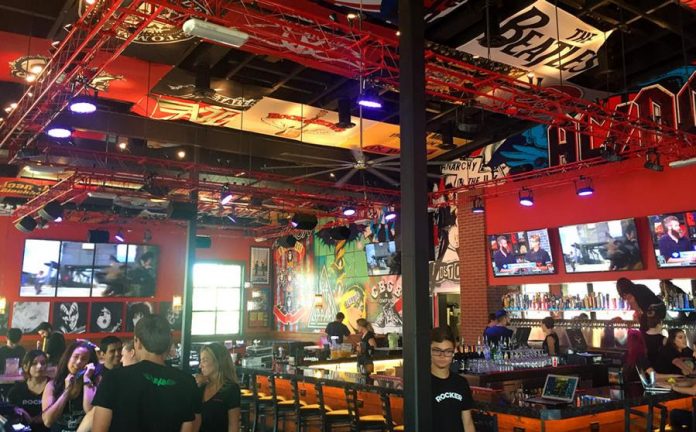 So, when Southern California Rock & Brews franchise partner Jon Mesko turned to CBC Technical’s Vice President David Meek to design the systems for his 2 new 200-capacity locations in Corona and Rancho Cucamonga, CA, Jon knew he had to over-deliver. Given the need for intelligibility in the high ambient-noise spaces, David and the CBC team selected the full-range VUE i8 2-way loudspeakers to anchor each system. They deployed a total of 33 i8s in Corona and 24 i8s in Rancho Cucamonga.

“First off, Rock & Brews play nothing but classic rock so the sound had to be extraordinary,” explained David. “But even more importantly, intelligibility of the lyrics was paramount. You can turn the VUEs up enough to hear the vocals without blowing everyone away.” David specified the VUE i8 class due to their ease of installation and out-of-box performance “The i8s use good-old U brackets which you can do just about anything with as they’re installed on the already-existing truss like a breeze. David also praised the i8’s flat frequency response, “One thing I’ve noticed is that everything from VUE is QC’d with every speaker.”

Feedback from patrons has been nothing but positive, “The client absolutely loves how each restaurant sounds,” said David. “It was a real honour to design the systems that deliver the truest classic rock experience to hundreds of patrons each day.”

With an ambitious goal to double sales year over year, David joined CBC Technical in 2015. During his tenure, the company has added a range of other restaurant clients including Outback Steakhouse, Eurkea! Restaurant, Yard House, Salt and Straw, Wild and Free, Lucille’s Smoke House BBQ and more. According to David, VUE will play a key part in that growth cycle given its versatility and sonic clarity, “While our growth plans are ambitious, the team and I have the growth track record and the amazing-sounding line of VUE loudspeakers in our court.”