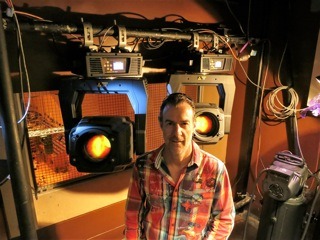 The world-heritage listed jewel in Australia’s architectural crown that adorns Sydney’s Harbour needs no introduction. In one of the world’s iconic venues, visited by millions each year, the Sydney Opera House Concert Hall is the largest performance space. While it regularly hosts the Sydney Symphony and Australian Chamber Orchestra, the Hall presents a huge variety of events, from comedy to awards nights to corporate functions. A need for flexibility, high demand leading to tight turnarounds and a requirement to provide the highest quality results drive Head of Lighting Andrew Richards and his team to constantly improve their workflow and the tools they use. That’s why the Hall has installed four High End Systems SolaSpot Pro 1500s.

Replacing six traditional profile fixtures mounted in the followspot room at the rear of the auditorium with a throw of 36-metres to the downstage edge, the SolaSpot Pro 1500s have been chosen for the huge range of looks they can provide and for their sheer power. “We needed some flexibility,” said Andrew Richards. “Instead of sending crew into the roof to refocus for every show we wanted a moving light solution and so LED was the way to go. The reason we went for SolaSpot Pro 1500s was for their brightness, their optics and what they could deliver onto the stage from that distance.”

Putting out a more-than-respectable 20,000 lumens from their 400w LED engine, the SolaSpot Pro 1500s include framing shutters, CMY colour mixing, linear CTO, two gobo wheels, animation effects, a prism, an iris, frost, and an 8 to 45° zoom range. This gives the Concert Hall lighting crew a huge arsenal to deploy across their diverse range of gigs. “We might use them for a downstage wash, focus them onto flowers set side of stage, user the shutters and light banners, or highlight awards tables,” Andrew outlined. “It’s the flexibility that’s the big advantage for us.”

High End Systems are often praised for the consistency and quality of their colours across their range of fixtures and the Pro 1500s are no exception. “We get some beautiful colours out of the SolaSpot Pro 1500s,” Andrew agreed. “Their colour saturation is fantastic. Having the ability to have these lights produce such great colour is another step in upgrading the Concert Hall to have full flexibility.”

Like all High End Systems products sold in Australia and New Zealand, the Concert Hall’s SolaSpot Pro 1500s are supported by importer and distributor Lexair Entertainment. “Lexair are absolutely brilliant,” said Andrew. “They are more than helpful and wonderful to deal with. I hope we can work together more in the future.”