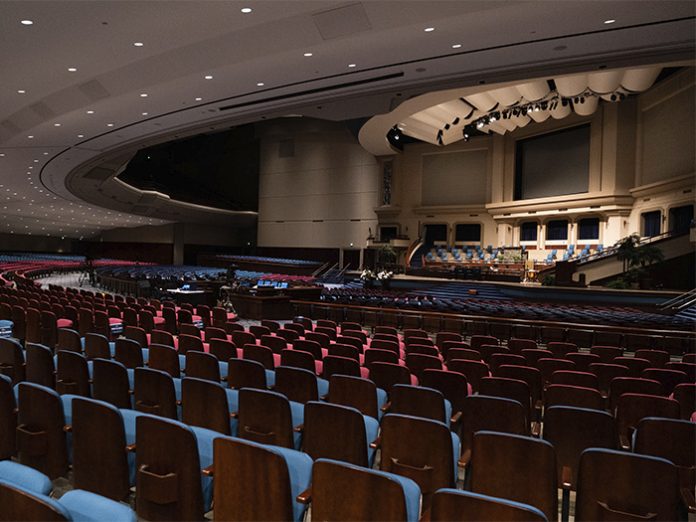 Pensacola Christian College teaches over 4,500 students at its beautiful Pensacola, Florida campus. Its students gather in the nearly 6,000-seat Crowne Centre frequently for community-building, events, chapel, for concerts, and church services on Sunday morning, and Sunday and Wednesday evenings. Sunday morning services are recorded and broadcast as “Rejoice in the Lord” on the Daystar Television Network. All Pro Integrated Systems, a locally-based AV integration firm with international reach, recently replaced a tremendous number of loudspeakers, subwoofers and amplifiers in the Crowne Center with a vastly smaller number of Danley products, including Danley Jericho Horns, TH118XL subwoofers and DNA-series amplifiers with onboard DSP and optional Dante connectivity.

“We put the original sound system in the Crowne Centre when the building was new almost twenty years ago,” explained Scott Vegte, director of sales operations at All Pro Integrated Systems. “It performed well for technology of the time, but it had passed its sunset age. Components were failing, and the manufacturer was no longer making replacements. We started talking about upgrading in 2018 and moved into planning in 2019. Because the Crowne Centre gets used almost daily, we knew we would have a short window to do the actual installation. Everyone involved knew there would have to be plenty of planning to make the installation smooth and successful.”

“We traveled with the team from All Pro to InfoComm 2019 in Orlando to ‘go shopping’ for possible replacement systems,” said Greg Moses, TV and DVD production director at Pensacola Christian College. “We listened to five of the biggest names in high-end live sound systems. Danley was one of them, and we were thoroughly impressed with their presentation at InfoComm. They showed us a huge number of consistent-sounding products to fit different situations.” Greg and his colleagues invited the top contenders to a shoot-out at the Crowne Centre in the fall of 2019, and the Danley team, including President Mike Hedden, brought their A-game: the Danley J7-95, which is capable of continuously delivering 141dB SPL in a 90- by 50-degree coverage pattern with studio-monitor-level fidelity. Danley was the unequivocal winner of the shootout.

“Point source is really the way to go when you can long-throw,” said Chris Wickizer, systems designer with All Pro Integrated Systems. “And Danley’s point-source designs are excellent. They sound natural even when they are running flat.” As it turns out, Greg and Pensacola Christian College already had experience with Danley. “We’ve had Danley subwoofers in the Arlin R. Horton Sports Center for five years now, and we drive them hard for special events,” Greg said. “They can rattle the place! They sound fantastic. In addition, we put a couple of Danley GO2 8CX loudspeakers in our 100-seat theater. They were a night-and-day difference! We’re very pleased. And we’re also very pleased that Danley manufactures all of its products right here in the USA.”

After the clear results of the shootout, Wickizer worked quickly to design a Danley system for the Crowne Center that would give the college plenty of horsepower, even coverage and superior intelligibility. In addition, he worked within the framework of the existing system to minimize the installation time, including the preservation of fabric-wrapped speaker enclosures that retain the visual aesthetic of the previous system. The new main system replaces fifty loudspeaker components with just eight Danley J7-95 Jericho Horns and a pair of Danley SH46s for side fills. The Jericho Horns are arranged in four hangs of two boxes each – one for the main floor and one for the balcony. Four Danley TH118XL subwoofers hang from a center scrim and provide the same thunderous (but undistorted!) low end that the college is so happy with in their sports center arena. Although the eight Jericho Horns cover the vast majority of seats, fifty-four distributed Danley SH95 loudspeakers replace the speakers in the under-balcony area. In addition, eight Danley SHmini loudspeakers fire from the lip of the convertible stage for front fill as needed.

On top of the sharp reduction in loudspeakers, All Pro replaced sixty-six old amplifiers with just thirteen Danley DNA-series multi-channel amplifiers, seven four-channel DNA 20k4 Pro models, five eight-channel DNA 10k8 Pro models, and one eight-channel DNA 3k8 Pro model. Together, the thirteen amplifiers provide seventy-six amplifier channels and nearly 200,000 Watts of power. All of the Danley amplifiers use onboard DSP for modest loudspeaker and subwoofer conditioning, and all include optional Dante inputs for simplicity and fewer conversions. As part of the installation, All Pro also upgraded the Crowne Centre FOH and broadcast consoles from Studer Vista 9 to Studer Vista X.

“The new Danley system is remarkably better than our old system,” Greg said. “Everyone who has heard it says that the sound seems to be coming from right in front of you. It’s very intimate and pleasing even though the Jericho Horns are fifty feet off the floor and one hundred feet away! At the same time, it’s not overpowering. We love the improved efficiency. With Danley we have far fewer loudspeakers and amplifiers to worry maintain. The coverage is perfectly even from front to back and from side to side. There are no dead spots or hot spots, no dips or lags. Even though I know exactly where the transition points are, I can barely detect them. Critically, the intelligibility is fantastic – everyone can understand exactly what’s being said!”