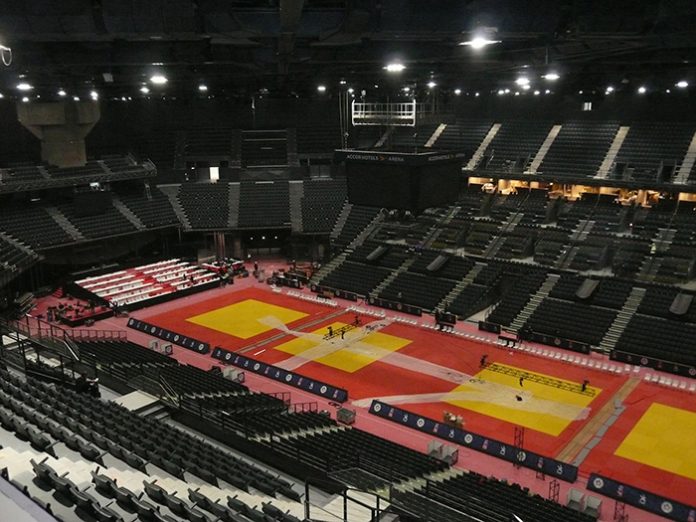 Paris’s famous multi-purpose Bercy Arena has recently been transformed into the flexible AccorHotels Arena following a makeover costing around €150m.

Built in early 1981, and known as ‘POPB’ (a derivation of Palais Omnisports de Paris-Bercy) the maximum seating capacity has been expanded to 20,300 – making it the world’s fourth largest arena. The integration of an Optocore/BroaMan digital fibre network in the new look facility allows for 30 different room configurations, enabling it adapt to the range of sporting events and concerts with ease.

While the main design team was led by architects, DVVD and engineers, Populous, the new technical infrastructure was provided by ENGIE Ineo. The company responded successfully to an audio-visual delivery tender issued by project management company, Astell, under the direction of Patrice Buniazet.

With the venue set to host nearly 130 events each year, according to ENGIE Ineo project manager, Marie-Anne Jofret, the arena had to be extremely adaptable in order to meet the requirements of organisers, promoters and spectators alike. An agile network, she knew, would allow the arena to be able to adapt to the multiple configurations required for all hosted events. And this is where Optocore and BroaMan came in.

Conversations with Optocore’s Technical Sales Manager (France), Philippe Moreau set the process in motion, and this was boosted by a trip to see the network in action on the set of long-running British prime time television ‘soap’ Coronation Street.

Here the technical consultants could see the unique, fully integrated transport solution in which all audio, video and data signals could be distributed site wide over fibre from any of the studios or stages. This provided conclusive proof of concept.

“Not only could they see a working installation with the designated equipment for our project, but we also studied a particular case, reviewing the implementation of solutions that we had not previously considered,” Ms. Jofret explained.

The main requirement was to bring greater flexibility and scalability to the site in order to offer production companies a fast response in terms of reconfiguration from all points of the site. “The latency time between sending and receiving signals also had to be extremely low when managing the live events, or at the OB vans for the video part.”

The audio and video networks needed to support the stage set-up as well as ambient sound for the VIP boxes and public and non-public circulation areas. Video links with the OB broadcast vehicles also needed to be provided, as well as DMX for the lighting.

ENGIE Ineo’s chief designer, Thierry Voisin conceived these networks around two Optocore rings – for PA sound and AV infrastructure. The PA sound ring is managed from the front of house PA position, with AES, Mic & Line distributed to the different technical areas via the Optocore interfaces from a Studer Vista 1 console running MADI.

The audio-visual ring is managed from the central control hub and distributed to different technical rooms. Audio signals (AES, Mic & Line) are relayed from a Yamaha QL1 console.

The video element of the system is run via various distribution points as point-to- point multi- fibre video or multiplexed in single fibre in order to limit the necessary fibre streaming resources required.

Multiple X6R-FX, X6R-TP and V3R-TP were specified in various I/O configurations (Mic In, Line In, Line Out). Also deployed were X6R-FX- Intercom devices equipped with intercom board for Clear-Com, DD32R-FX for AES/EBU and DD2FR-FX for MADI — which connects to the Studer Vista 1 for control of the Optocore mic preamps.

Marie-Anne Jofret confirmed that these products had been chosen not only for their flexibility and adaptability. “In addition,” she said, “they also represented a real financial advantage, offering a good quality/price ratio.”

Both ENGIE Ineo and Astell were happy that the Optocore/BroaMan networks had fulfilled their objectives, she said in summary. The goal had been to make available, at different key points in the building, a number of audio/video signals in order to manage the venue without having to reachable for each event.

“The combination of BroaMan and Optocore gear made it possible to meet these constraints — simply by implementing these optical fibre networks,” she confirmed. “And when it came to achieving low latency the Optocore/BroaMan devices met the requirement, allowing us full flexibility.”

In terms of the roles played by the individual stakeholders, as the AV design consultants, Astell were responsible for answering all questions at the procurement stage and validating proof of concept of the fibre infrastructure.

Philippe Moreau provided commercial and technical support throughout, and was also the link with the Optocore/BroaMan R&D teams in Germany. In addition, he organised two training sessions and a three-day workshop to allow hands-on operator experience.

As a result, the facility now rivals the largest indoor facilities in the world: the Madison Square Garden in New York, the Staples Centre in Los Angeles, O2 Arena in London and the Mercedes-Benz Arena in Berlin.