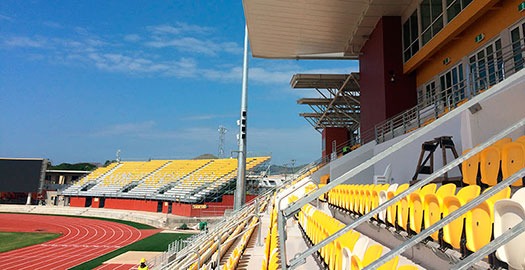 “We chose One Systems Cross Field Array-2 (CFA-2) loudspeakers because of their ability to project into a specific zone from a distance and also cope with the hot humid environment,” explained Brent Eady, projects manager for Jansen. “We mounted all of them on the lighting poles, which allowed us to position them to blanket the stands and had the advantage of making them inaccessible to vandals and thieves.”

The design called for a total of twenty CFA-2 loudspeakers to cover the north, south, east and west grandstands. They were mounted to four lighting poles in the northwest, southwest, northeast and southeast corners of the stadium.

“Custom brackets were designed by One Systems that enabled the loudspeakers to be offset from obstacles on the poles then pan and tilted back to the required direction,” Brent added. “Brackets were strapped to the poles with six double wraps of 19mm Band-it each.”
The CFA-2 was designed to provide very high intelligibility and acoustic output where long throw requirements are specified – exactly what was required at Sir John Guise Outdoor.

“The system was christened before the games commenced with a Rugby League game between the local SP warriors and the Australian Magpies,” added Brent. “An enthusiastic capacity crowd of 25,000 were effortlessly covered by the new public address system. The games committee commented that system was astonishingly clear and powerful.”
Multi-core speaker cable was manufactured to the specific lengths and gauge needed and laid in the cable trenches from the poles to the equipment room located in the basement of the main grandstand – the longest length being 300 metres.

“There are many things to take into consideration when planning to fill an outdoor stadium with clear and powerful sound,” he continued. “The CFA-2 are more expensive than some other loudspeakers, but they were an economical solution because they cover long distances from less mounting positions with less speakers. Lighting poles are inevitable these days and they have the advantage of coming along with cable trenches. They are the ideal spot to mount the CFA-2 loudspeakers. It took away the hassle of working with constructors and eliminated the need to try to find access for cabling after the fact.”

The remodeled Sir John Guise Indoor Stadium, with a seating capacity of 1,700, was home to the weightlifting, powerlifting, bodybuilding and boxing events at the 2015 Pacific Games. This time a One Systems distributed system was installed to meet the PA requirements for the venue. The system specified twenty-two 208CIM loudspeakers mounted in the ceiling aimed straight down to cover the athletes and their fans.

“The 208CIM is a compact, high-output loudspeaker with exceptional intelligibility,” explained Brent. “It is ideally suited for high ambient noise indoor applications like Sir John Guise Indoor, especially during the games.”

Additional 208CIM loudspeakers were utilised to reinforce the Taurama Aquatic Centre and Indoor Sports Complex which provided sporting facilities up to international competition standards for swimming, volleyball, basketball and a variety of other indoor sports. The Centre includes an outdoor Olympic standard 50 metre competition pool and a separate 25m pool for use as a warm up pool during competition. Inside the building the main indoor sports hall features room for six Olympic standard volleyball courts with movable seating that can accommodate 2,000 spectators.

The main indoor sports hall was equipped with a zoned, distributed system made up of one hundred sixteen 208CIM loudspeakers mounted in the ceiling. The loudspeakers are installed in eight zones. Six zones for the six courts, plus two extra zones that are utilised when the system is in two zone mode – each zone covering three courts. It was designed to provide maximum flexibility and the intelligibility they require.

“It is a state-of-the-art complex with sound reinforcement that will stand the test of time,” concludes Brent. “The One Systems loudspeakers can handle the heat and humidity while providing the finest quality audio available. The committee was extremely pleased with how the systems performed and continue to be impressed to this day.”