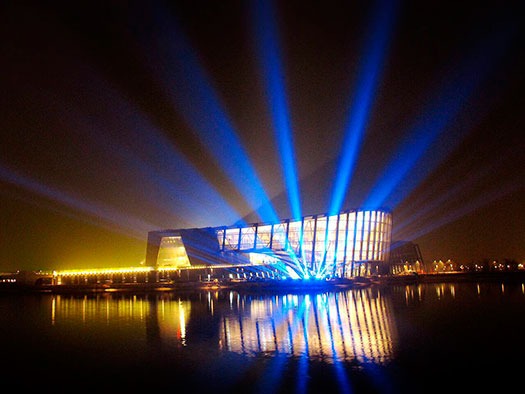 In Taibao City, Taiwan, a Southern Branch of the National Palace Museum has opened, driving cultural, educational, social and economical development to both northern and southern regions of Taiwan. To commemorate its inauguration, Aurora Lighting was called in to overview the design, and local distributor Jackson Yu of DLHG, to offer project support to the job.

To enhance the important landscape surrounding the building, the lighting display for the opening ceremony took place by the lake side, which created a barrier between control and lighting rig: “We got worried about DMX runs until we realised DLHG were W-DMX’s distributor in Taiwan.” said Scotty Chen, of Aurora Lighting. “Jackson explained us the intricacies of this Wireless systems, including the data-safe technology, which adds redundant packs of DMX data to the transmission. The system worked flawlessly” added Chen.

“The furthest distance between transmitter and receiver was 250 metres”, commented Jackson Yu, who’s been distributing W-DMX since 2013. “Whilst we spent two days setting up the lighting, the Wireless system took two minutes.” added Jackson. When dealing with distances like this, W-DMX stands out from the competition and added Invisi-Wire technology:  it deals with DMX frame characteristics such as the break, mark after break, interslot timings and slot count parameters and recreates them exactly as they came in at the transmitter side. This increases the signal’s fidelity and makes W-DMX the most reliable system on the market.

Niclas Arvidsson, CEO of Wireless Solution Sweden, added: “We are not popular by chance: users like Aurora and DLHG trust us for our technology and support, and their confidence means that more people are moving from cable to wireless technology. We loved to hear about this project, and hope to see many more”.