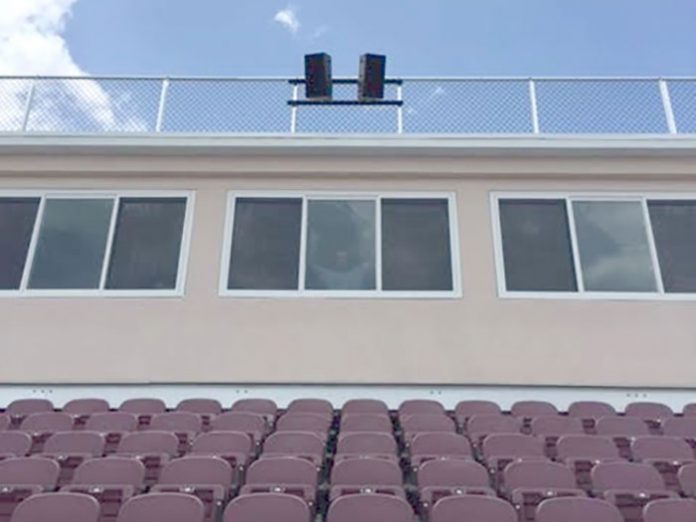 Alabama’s Satsuma High School recently received a grant to build a new football stadium, something the school had been lacking since it opened its doors three years ago. Unfortunately, the grant was only enough to cover the stadium, but not many extras. It looked unlikely that the stadium would receive the new sound reinforcement system that had been designed by Alabama based, Alpha Sound & Lighting.

Experience has taught Alpha Vice President, Michael Evans, a bit about tight budgets.  He installed three One Systems 212CIM loudspeakers at the old stadium a few years back with the intention of repurposing them in the new venue. As a result, he was able to add a single new 212/HC loudspeaker to the mix and mount two loudspeakers on light poles located behind the home bleachers to blanket both sides of the new stadium in sound.

“On each of the light poles we positioned one of the loudspeakers to fire across the field to cover the visitors side seating, while the other is firing down on the home team fans,” Evans explains. “We also mounted two more 208/HTC loudspeakers above the eaves of the press box to focus the sound and reinforce the location of the announcers.”

The 208/HTC loudspeakers were placed next to each other, splayed left and right, and set up on delay with the light pole clusters. Similar to One Systems’ 212/HC, the 208/HTC is optimized for outdoor use, specifically designed for short to medium throw application. The dual eight-inch two-way design provides exceptional SPL for such a compact design.

The final touch was the installation of two 104/HTH loudspeakers inside the press box, which are utilized as monitors for the announcers.

“The school was thrilled that we could accommodate their needs while staying within budget,” concludes Evans. “One Systems loudspeakers do the job nicely not only because of their direct weather capability, but their sound quality is quite good. So we have vocal intelligibility, music quality and weather resistance. It’s a great package.”