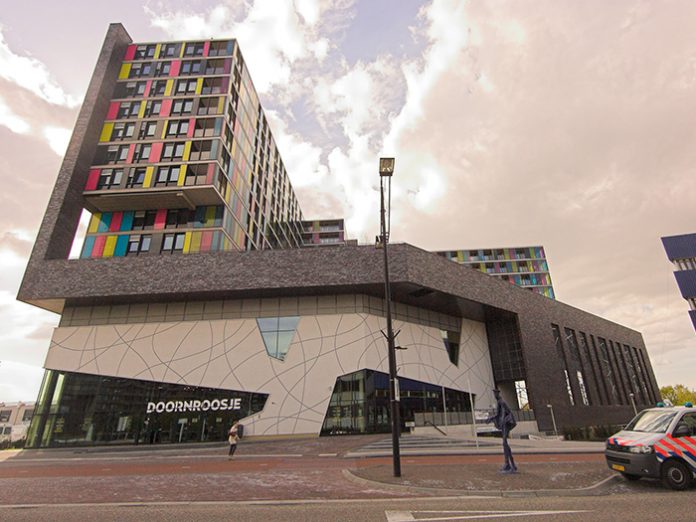 Robe moving lights have been installed at the new Doornroosje (Sleeping Beauty) venue in Nijmegen, one of the famous live music venues in The Netherlands.

Originally founded around 1968 and since 1970 operating out of a disused school building in the south suburbs of the city, the club became a popular hippy hangout in the 1970s, and through 40 years at the cutting edge of live music and entertainment, legendary for showcasing ground-breaking artists on the cusp of success and popularity, from Pink Floyd to the Gaslight Anthem. It also hosts Holland’s longest running club night, Planet Rose.

As well as being renowned for some of the best techno sounds in the country, Doornroosje was also well known in the day as one of the first places in The Netherlands where marijuana was openly available.

Now housed in a brand new building right downtown, sandwiched audaciously between central station on one side and the police constabulary on the other, and with several floors of student accommodation above, the gleaming new purpose-built Doornroosje opened at the end of 2014, designed specifically for life as a busy live music and performance space.

It is resplendent with an 1,100-capacity main hall and a smaller auditorium for 400 people (the same capacity as the main hall in the old venue). The funding for the new building came from the local government, and one of the stipulations was that they purchased new equipment.

Overseeing the lighting element of the new technical installation was Director of Lighting Robbie van Reen, who has worked full time for the venue since 2009. He was extremely keen to get Robe on the rigs for both rooms.

There were also some Robe links to the old venue. They had some ancient Movietec fixtures – made by Robe in the early days when they were an OEM manufacturer – which were still going strong at the last gig, and also that Robbie had more recently purchased six LEDWash 300s for the old venue from Controllux, Robe’s Benelux distributor.

With Robe already ‘in the house’, based on these good experiences and the excellent support from Controllux, Robbie decided to continue the trend.

The original six LEDWash 300s are used as a floor specials package as and when needed in either venue.

“With the size and headroom in the large hall we felt we wanted the punch, power and clarity of discharge fixtures,” explained Robbie. In the smaller room he felt LED units were more appropriate, and in particular RGBW LED fixtures. At the time of specification, only Robe could deliver RGBW products.

Robbie is the compact Lighting department’s only full time member of the team – he works alongside Head of Sound Gonny Maas – and they encourage regular volunteers to work at Doornroosje allowing them to build their technical skills in the process. Currently there are about 10 on Robbie’s crew, from which many will continue into industry careers.

Doornroosje continues to stage gigs embracing all genres of music – from EDM to heavy metal, death punk to country, jazz to indie pop, and everything in between, so with such a rich mix, it was vital to have a highly flexible lighting rig and one that would satisfy visiting LDs.

On the MMX Spots, Robbie likes the dual animation wheels, a feature which he uses a lot on the show he personally lights. He thinks the framing shutter blades are excellent in the WashBeams, and ideal for creating a new palette of effects by shaping, rotating and indexing the light beam.

Having the LED fixtures in the small room enables him to let the volunteers get creative with the rig without having to watch them too closely.

For control, there is a choice of MA Lighting grandMA2s, High End Systems and assorted Avolites consoles.

With the new venue now fully ramped up, bookings are multiplying and many more shows than previously are being staged. Around eight per week is an average, and more than one a day is not unusual. One of the first major international artists to visit were the Kaisers Chiefs on their tour at the start of the year, and many more are planned together with a lively programme of leading and emerging Dutch performers.