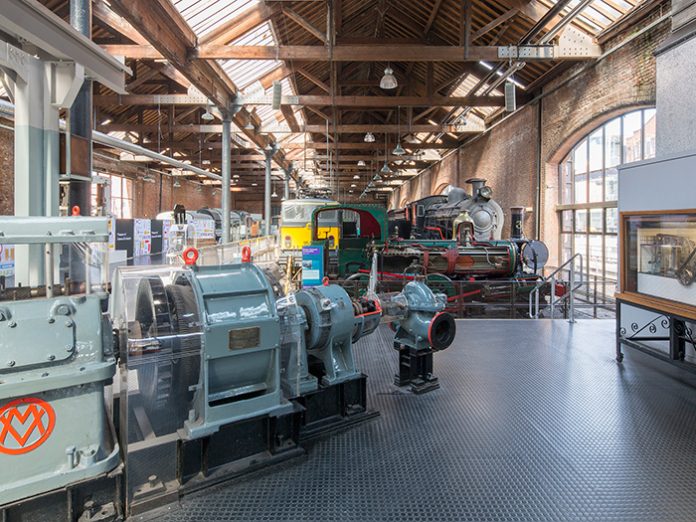 Situated on the site of the world’s first railway station, built in 1830, The Museum of Science and Industry in Manchester is a large museum devoted to the development of science, technology and industry, with emphasis on the city’s achievements in these fields.

Also based in the north-west, system integrator Pure AV, which had already carried out past work for the client, were again introduced to provide a sound reinforcement in one particularly challenging area within the Power Hall, and turned to a Martin Audio O-Line solution, as it has many times in the past.

They were tasked with providing an audio system in a giant, loud ambient room within the Power Hall used for presentations to the general public. The area shows a locomotive with the side cut away while the presenter explains the workings of a steam engine. The audience is positioned in a viewing area opposite the engine and the hard surfaces of the building and extreme engine noise create a very difficult environment for a microphone presentation.

In order to overcome the noise of the steam engine without blanketing the whole area with sound it was necessary to create a focused area directed at the audience. The solution was to place two hangs of six O-Lines at high level either side of the steam engine. This enabled Pure AV to implement the correct angle of the sound over the audience, where it could effortlessly punch the sound into the midst without providing excessive spillage to other exhibits.

Tony Crossley, Pure AV’s Pre-sales Technical Director, said: “Our previous experiences with O-Line gave us confidence that the system had the capability to meet the demands of the environment – in particular the ability to control the spread of sound and deliver a clean listening experience for the audience.

“Using the O-Line modelling software we were not only able to focus the sound on a fairly tight audience area but also look at the predicted SPLs elsewhere in the gallery. This enabled us to play around with the height and angle of the array to really fine tune the coverage whilst minimising unwanted spill into other areas.”

The digital signal processor allowed them to adjust the audio to deal with acoustic challenges.

The feedback from the client was equally positive, with Interim Explainer Team Leader, Shea Taylor, also waxing lyrical. “One of the main challenges of presenting in the Power Hall is trying to engage the audience whilst the steam engines are running and other visitors are looking at our collections.  We have to perform over all this noise, and since this is an historic building with high ceilings, it’s not the best for acoustics.

“Prior to the introduction of the audio system we basically had to project as much as we could, which could sometimes be a strain on the voice.  Although we always succeeded in keeping the audience engaged, it meant us competing with our environment and all the other noises and sounds of the gallery,” continued Shea.

“The installation of O-Line has helped us so much because it has allowed us to take a more relaxed approach now that we no longer have to compete with the other sounds.  The audience feels fully immersed and isn’t distracted by the rest of the gallery; visitors are completely embraced by the sound within the performance area and it feels like a separate show space.”