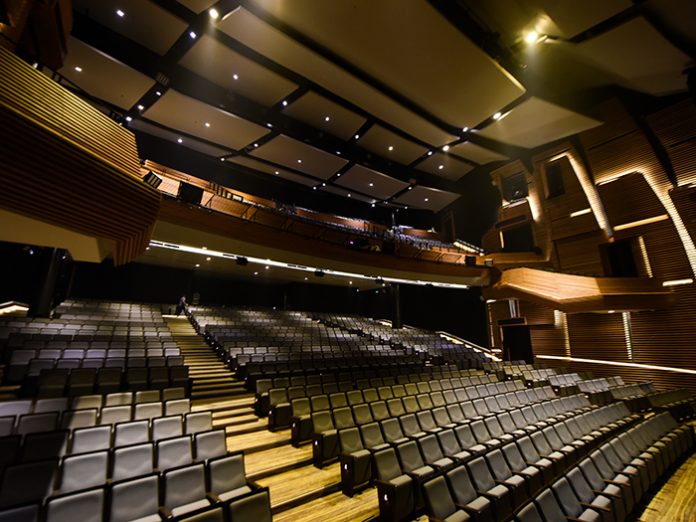 A popular destination for shopping and evening entertainment, Bangkok’s Siam Square has seen the opening of a state-of-the-art theatre on the seventh floor of its newest mall, the Siam Square One Building. An L-Acoustics Kiva audio system ensures audiences in its 1,044-seat main venue enjoy high quality sound in every seat.

Officially named the KBank Siam-Pic-Genesha Centre of Performing Arts, the main theatre is complemented by the 200-seat Playhouse and a 40-seat studio theatre. The complex is owned by leading Thai media company, Workpoint Entertainment Public Company.

The sound system was chosen following a live demo comparing five leading brands. A committee consisting of composers, art directors and board members from Workpoint evaluated various different types of music – male and female vocals, traditional Thai instrumentals, pop and rock music – over all systems and L-Acoustics scored highest in all categories.

The L-Acoustics system was chosen for the house PA, featuring L-R hangs of nine Kiva and two flown SB15m subwoofers, a centre hang of eight Kiva and four ground-stacked SB18i subs. Five 8XTi were installed as front fills, five more 8XTi and 12XTi as main under balcony/VIP box delays and a further five 8XTi as secondary under balcony delays.

“Due to the physical layout of the theatre, which features around 700 seats in the stalls and another 300 on the balcony, we needed to satisfy the requirement of 95dB +/- 3dB loudness over the entire seating area. We chose Kiva because it delivers the required SPL and the exceptional vocal clarity specified by the theatre designers,” said Tony. “Because the main proscenium system is flown quite high, we installed the frontfills to cover the front four rows and the delays to fill beneath the balcony. This achieved a uniform and seamless 95dB at all seats.

“This is a very high quality venue and the owners are completely happy with the coverage, levels and audio quality that the L-Acoustics system delivers.”