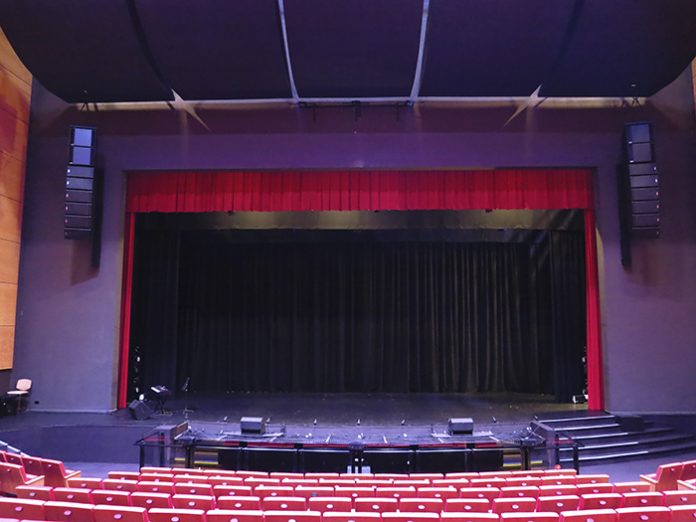 In Perth, western Australia, Elite Audio Visual Productions has recently completed the installation of a NEXO GEO S sound reinforcement system in the 900-seat theatre at St Hilda’s Anglican School for Girls, which has built a reputation as being one of the most desirable and in-demand theatres in the city.

EAVP were engaged to recommend, supply, and install an appropriate sound reinforcement system that would meet the varied needs of the Joy Shepherd Performing Arts theatre, which has 613 seats in the stalls and 287 seats in the dress circle. It serves as the school’s main auditorium for internal events and productions but is also regularly hired by external clients for dance shows, concerts, church services and more.

The previous system had begun to develop several problems and did not provide the even coverage and power needed for the theatre. This was beginning to have a negative impact on external hires, as suitable PA systems had to be hired in for each event, resulting in loss of revenue and time. One of the main drawbacks of the existing system was the poor coverage of two key areas – the dress circle, and the seats below. The sound in these areas was muffled and missing much of the upper frequencies.

The original system had no subwoofers, resulting in little to no low-end power. Theatre manager David Spooner asked EAVP to design a system that could meet the following criteria; Be flown from the roof so as not to take up stage or floor space. Able to handle anything from school assemblies to rock concerts. Provide excellent coverage of the entire auditorium. Offer exceptional sound quality, while being visually unobtrusive. A reliable brand with easy access to spares and support. By using acoustic modelling software, it was possible to virtually test out different models and configurations of PA systems in a 3D model of the room to work out how to get the best coverage and output level.

It became apparent that in addition to the two main PA hangs, the system would need to include front fill speakers around the front of the orchestra pit and delay speakers above the dress circle in order to achieve optimum coverage. EAVP’s solution was NEXO’s GEO S12 line array, comprising 6x GEO S12 top boxes and two 18 inch LS18 subs per side, with 3x compact NEXO ID24s for front fill and 4x ID24s as delays above the balcony. Chain motors were installed for safety and ease of maintenance in the future. Large diameter holes had to be drilled through the suspended ceiling to allow the chain and cabling to pass through. Custom mounting brackets were designed and fabricated in-house to attach the front fill speakers to the glass balustrade in front of the orchestra pit.

The entire system is driven by two NEXO NXAMP4x4 four-channel amplifiers which are housed in new racks behind the proscenium. This location was chosen for ease of access and to reduce the length of cable runs to the main arrays. All processing including delays and equalisation is done within the amplifiers using NEXO’s proprietary NEMO management software. After the system had been tuned for the room, the recorded difference in SPL throughout the venue was less than 5db. The result is even, full frequency coverage throughout the theatre.

Theatre manager David Spooner reported that “the installation and commissioning of our NEXO sound system by EAVP was an absolute dream. The work was completed on schedule and the installation was clean, tidy and most importantly, on budget. The new sound system now gives us the flexibility that we need in the venue. As the sound engineer for many events in the PAC, I no longer feel like I’m “fighting” against the sound system. There is more than enough headroom in the equipment and I never have to push the system.

“I’m impressed with the clarity of the system, the dynamic range in the NEXO system is marvellous. Music reproduction is bright and clear. We have been using the system for the past 4 months and have covered everything from large choirs, rock bands, chamber concerts and many presentations. I’ve yet to have a customer complain that the system was too loud or not loud enough, or that they were unable to hear a presenter. Something that would happen regularly with the system that we replaced. Many thanks to EAVP for a job well done.”