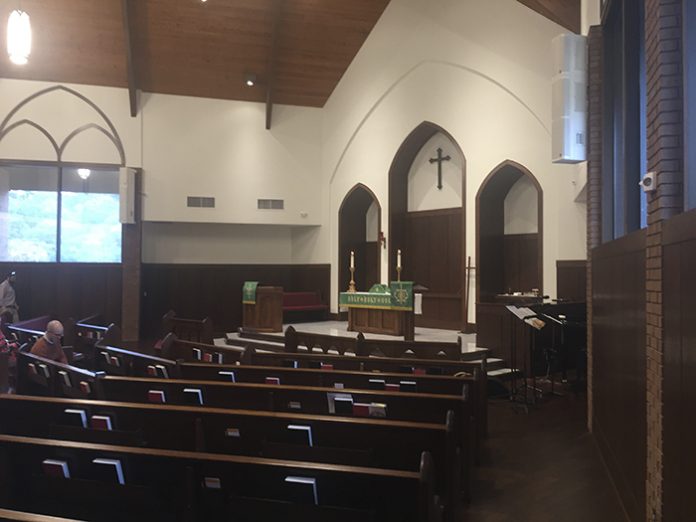 Recently the congregation of Christ the King Anglican Church moved into an existing church building in Hoover, Alabama, eight miles south of Birmingham, renovating their new home to fit their needs. As part of this renovation, MediaMerge of Birmingham designed and installed a Dante-enabled sound system in the sanctuary, based on Renkus-Heinz’ new IC Live-X series high-output digitally steered line arrays.

Services at Christ the King are fairly traditional, including spoken word, acoustic guitar, piano, mandolin, and a few singers-but no choir, organ, or electric instruments. Designing the new system presented several challenges, however, even without the need to handle high sound pressure levels. “The sanctuary seats about 300 people and has flat floor level seating and a large balcony in the rear with raked seating,” described MediaMerge system designer Jason Vieira. “The balcony juts out about a third of the way into the room, so half of the audience is under the balcony, and it has a big face, so there would have been a lot of reflections if we didn’t beam steer around it. One of the main reasons we chose Renkus-Heinz steerable arrays is their ability to steer around that balcony face and still cover the audience both in and below the balcony.”

Adding to the complexity, the sidewalls of the sanctuary are lined with large windows, so acoustic treatment could not be applied in those areas, and some internal surfaces were brick, including the surfaces to which the IC Live-X arrays had to be mounted. “We did some acoustic treatment along the balcony back wall, which is about 50 feet from the stage,” Jason recalled. “The room is is a triangle, so backstage comes to a point, and then the angle opens up to about 100 feet wide. Underneath the balcony is drop ceiling. So there were a lot of challenges that we met with beam steering.”

MediaMerge has years of experience using Renkus-Heinz loudspeakers, and the AVL integrator’s project at Christ the King Anglican Church was one of the first IC Live-X installs. Their team installed a left/right pair of ICL-X modules, arrayed with ICL-XS extended LF modules, all custom-painted white. “They’re mounted on brick, about 15 feet up, so they pop visually,” Jason observed, “but they look a lot more elegant than black columns would have, and there are other white accents in the room.”

The ICL-XL is an extended ICL-X module with four one-inch compression drivers and four eight-inch woofers and is steerable down to 750 Hz. ICL-XL freely arrays with ICL-X modules, and adding ICL-XLs to an array of ICL-Xs, as MediaMerge did at Christ the King, enables significantly better LF control at lower system cost.

“Having high-quality, Dante-enabled arrays with digital beam steering was important in meeting the challenges at Christ the King Church,” attested Jason. “We like the modularity of the ICL-X Series, and they were a perfect fit for the sanctuary, especially given the size of the space and the type of music they’re doing. We were able to hit everything with just one pair of ICL-X arrays; we didn’t need fills. One of the key selling points for us and for the client was that the ICL-XL subwoofer integrates as part of the ICL-X array, so you get full range, including sub frequencies, all within the array. Flying a separate sub enclosure or having a subwoofer on the floor somewhere would not have worked for this room aesthetically.”

All system processing is done within the arrays, programmed using Renkus-Heinz RHAON II software. “RHAON II is pretty straightforward to use,” Jason reported. “It did a really good job of user-friendly beam steering. When we first installed the system, we probably had 10 beams per side, but Renkus-Heinz updated the software since then, and we were able to redo the coverage with just two or three beams per side. The system knew where the lobes needed to go.”

The rest of the sound system consists of wireless mics and a Yamaha TF-Rack digital mixer located backstage, controlled with an iPad running Yamaha’s TF software. “It’s a straightforward, great sounding, simple system,” affirmed Jason. “The Renkus-Heinz ICL-X arrays knocked it out of the park. The congregation is ecstatic; they love it.”