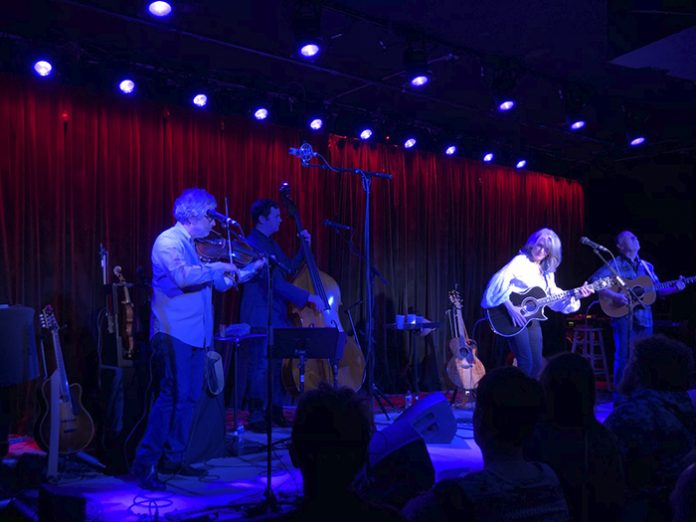 Designer and programmer of the new lighting system is Kent Cubbage, who specified the lighting console and Elation fixtures in cooperation with lighting vendor and installer Fantasee Lighting of Belleville, Michigan. “When you’re dealing with The Ark, you’re dealing with a piece of history,” Kent said of the intimate 400-seat venue steeped in decades of American music narrative. “My goal was to create a rig that visually emulated the classic PAR rig it was replacing.”

To mimic that vintage PAR look, Kent used 30 Fuze PAR Z60 IP single source PAR luminaires, which have a lens face that appears as one colour instead of individual LED diodes for a non-pixel look reminiscent of traditional LED wash fixtures. “With the COB single source, they emulated the PARs they were replacing,” he stated. “I knew if I put up a bunch of LEDs, the extremely loyal audience at The Ark would be offended by the ‘skittles’ look.” Kent also needed a fixture with a wide angle to deal with the room’s low trim and because the designer had used Fuze PARs for a previous outdoor install, he knew they were IP rated and therefore fanless and quiet. “The Fuze checked all my boxes: LED, quiet, old-school source look and wide angle.”

Because space on the floor is at a premium, all of the Fuze fixtures hang overhead with some outfitted with barn doors, which Fantasee Project Manager Nate Mulvihill said are wonderfully effective. “Having the barndoors was huge for us,” he said. “It’s a sleek fixture so you don’t need the barndoor, but having the option was important as all the audio is in the air and we use them to peek around the speakers and keep light just on the stage.”

Providing a backline wall wash are 12 SixBar 1000 IP battens with 6-color LED multi-chip. “The room is backed with a big black curtain and I pushed hard to get some lights on that,” Kent said. “I was pretty insistent that having the ability to color the backdrop was going to be a game-changer for them, especially in terms of the photos and video coming out of there.” The SixBar measures 34″ long but is exceptionally thin and its narrow profile was key. “We put these fixtures into a four-inch slot between the curtain track and the backlight pipe, and while we had to make our own hanging hardware, the fixtures themselves fit right in there.”

Kent had used the non-IP version of the SixBar batten in the past and says he knew it was bright and responsive but wasn’t sure how it would work as a cyc fixture. “The pixel mapping was a huge bonus for me,” he said. “I love the look of a great big color fan as a static backdrop, and the versatility of the intensity and color effects you can run for different genres and tempos of music has been great.”

Because The Ark is a space where some of the biggest names in folk music often perform solo and frequently with only an acoustic guitar, silent fixtures were a must. “We went with IP rated fixtures, not because they needed the IP rating but because it’s a folk music venue and fan noise is a real issue,” said Fantasee’s Nate Mulvihill, who installed the lighting. In fact, trim heights are so low that the FOH lights are right over the audience’s head. LD Kent added that a further consideration was creating a lighting rig that didn’t require maintenance or having volunteers climbing ladders to focus every night.

The project came to fruition in late 2018 with the install taking place over a quick 3-day period in late January. “Fantasee did a fantastic job as both vendor and installer,” Kent said. “We finished out the purchase process in a flurry of activity before the end of the year, and their rep and I were both back-and-forth on Christmas Eve and Christmas Day to make it happen on time. In the prep process, they worked with me to solve some issues with shooting under the PA, and they pretty much nailed knowing how many people to have on site for how long. They also solved issues like fabricating new feet for the SixBars and adding new hanging positions.”

The designer acknowledges Fantasee’s Barb Silber, who took time out on Christmas to ensure the install was on track, as well as Fantasee’s Nate, the lead on the install and someone Kent called: “just incredibly smart and experienced.” He also commended Joe Giese, Tech Manager at The Ark, who worked with Cubbage through the entire process and has been using the lighting on a daily basis. Joe commented: “After almost 20 years, the Ark has finally gotten a production facelift! I’m very proud to have been a part of bringing the latest LED lighting technology to one of the country’s finest music venues. Elation makes up the bulk of the fixtures in the room now, and we couldn’t be happier with the look, the customer support, and the flexibility of these lights. We’ve only been using them for a few weeks and not a show goes by without at least a few comments about how great our space looks.”