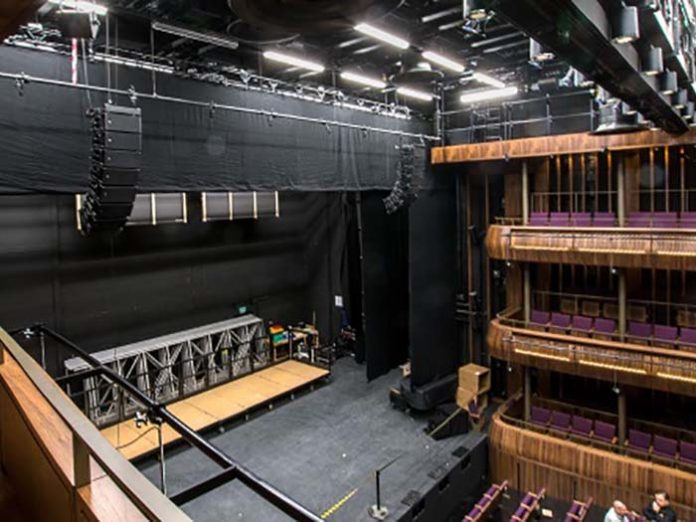 The Linbury Theatre has recently reopened following an ambitious three-year renovation project, which saw the original studio theatre completely gutted and reburbished. A key part of the renovation was the installation of a brand new sound system from EM Acoustics, supplied and installed by Stage Electrics.

The decision to use EM Acoustics for the full PA system turned out to be quite straightforward as both Tom Thompson, technical manager of the Linbury Theatre, and Martin Adams, the technical manager in charge of the redevelopment project, both have a long-standing relationship with EM and already knew the HALO-C compact line array system well. It was also important to them that EM Acoustics is a British brand. “A flagship British institution should use flagship British products, so EM is also ideal from that point of view,” said Tom.

Tom describes the new setup with pride: “It’s a very flexible system that can be used in a number of ways, but the standard setup is two hangs of eight HALO-C boxes left and right with a separate set of ground-stackable HALO-Cs at stage level with two pairs of EMS-118 subs – one at stage level and one up high”

“We’ve then got lots more boxes of different types around the space to fill in the little gaps underneath the circle overhangs and also to provide rear surround. They vary in size from EMS-41s and upwards depending on the use of the space. We also have a row of EMS-41s built into the front of the stage as front fills as well as a number of free-standing EMS-81s for foldback or anything else we might need.”

“The best aspect of the system is simply how smooth it is,” declared Tom. “The way the PA responds to the space is fantastic.” He also had a special mention for the newest – and tiniest- addition to the EMS range, the award-winning EMS-41. “The control they give us over the sound in the auditorium is excellent. We have them on just enough to pull the image into the right place, but you don’t notice any difference between the EMS-41s and the main PA. It’s seamless…”

Nick Manning, head of sound and video for the Linbury Theatre, who is also an inveterate fan of EM Acoustics, is equally impressed with the new system. “What’s so impressive is the fact that although you have a L/R stereo pair of hangs, there is no sense of separation; it’s a completely smooth sound that just fills entire space that speakers are firing at. You can walk from one side of auditorium to the other and there are no lumps or bumps, or areas where you’re getting more of some frequencies than others, it’s just completely flawless. Then when you combine those with the subs and all the other speakers around the space, it’s as though the whole system has come from the same DNA – it’s amazing.”

A total of fifteen EM Acoustics DQ Series amplifiers are used to power the system which is fully networked via Dante.

Manning said that reactions to the new system have been overwhelmingly positive, including from Alex Beard, the chief executive of the Royal Opera House, who came to see and hear the system once it had been commissioned. His reaction was pretty direct: ‘It’s great – it sounds great – and that’s all I’ve got to say.’ You can’t ask for more than that really!”