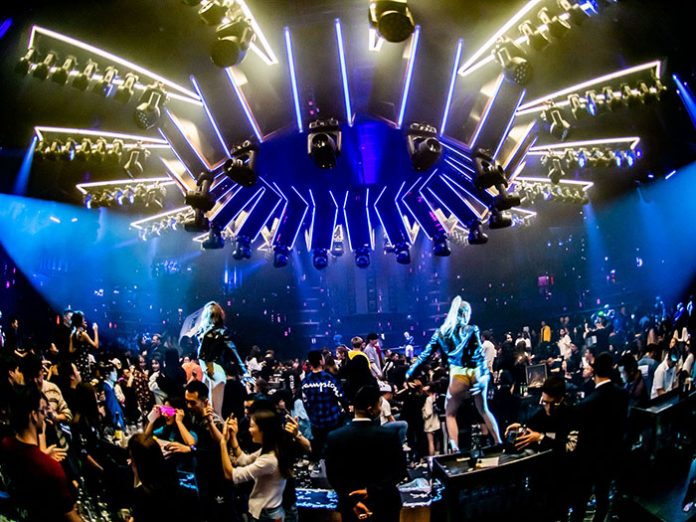 Creative director Daan Oomen and his team from Netherlands-based visual specialists Live Legends have delivered another outstanding club project in China – OT Kun in Kunming – following up their stunning work at One Third in Beijing.

At the core of the lighting rig are 56 x Robe MegaPointes and 110 x Spikies chosen by Daan and Live Legends’ lighting designer/production manager, Serge Patist.

They were again working for NOA’s Arc Group as the design partner for this newest flagship venue, a 1,500 capacity property that includes 50 VIP tables positioned right in the centre of the main room action around the dancefloor.

Prominent guests can therefore be in the vortex of an immersive lighting, video, automation and visual experience… all designed and specified by Live Legends. The long-term objective is to create a series of ground-breaking clubs that unite imagination and cutting-edge technologies, offering a totally new eye-popping clubbing phenomenon.

The scope of Live Legends’ work included everything from the front façade, coat check and reception areas to the main room and dancefloor, co-ordinating all the visual disciplines with the goal of repeating the success of One Third Beijing but with a completely different look and feel, offering an unprecedented journey for guests and adventurers.

The MegaPointes are deployed around the main room’s central feature, which is a ring of square objects clad in video panels presenting a prominent circle shape. This was inspired by Yunnan tribal necklaces and headpieces, known for their beauty, interesting shapes and vibrant colours.

The 100 Spikies are also dotted around the central feature as well as the DJ booth.

Daan and Serge have used Robe products on several previous designs including One Third Beijing that has over 400 Robe moving lights in the rig.

Spikies were again chosen for their small size, versatility, 360° rotation and for being able to squeeze into the tightest gaps.

MegaPointes were selected for their incredible power and intensity, together with the richness of the colours, excellent gobo choice and numerous other creative features.

Both these popular Robe luminaires were also picked for their proven reliability, general dynamics and the flexibility they bring to an installation of this type.

OT Kun also has many other lights including LED strips and strobes plus a substantial automation system and lasers.

Daan explained that the biggest challenge was maintaining an overall intimacy in the space, emphasising the spectacular and dramatic beam-work around the room and creating a good balance between the aura of international clubbing and the friendly vibes of the city.

As implied in the VIP table layout, Chinese clubs traditionally don’t have massive dancefloors. There is more emphasis on being seen to be there – at the tables with the right influencers and fine champagnes – which is totally different to European style EDM where venues are geared more towards music and dancing.

At OT Kun, being able to enjoy the visual outlook and soak up the ambience from your VIP table is key.

The design direction for the club also embraces local Yunnan culture. Kunming is the capital of the south-eastern China province and an important financial centre. It’s known as ‘The Spring City’ for its excellent climate. “Everything is super green and there’s a multitude of parks alive with the scent and vibrancy of flowers, foliage and trees” explained Daan. “We wanted to reflect some of this impressive natural beauty in the design and combine it with a thrilling EDM experience”.

Lighting control is via a grandMA2 full size, with a disguise 4×4 media server and Resolume running the video and pixel elements and a Pangolin for the lasers.

All the lighting equipment was supplied via MRT in Shanghai and installer Topfair, both co-owned by the NOA’s Arc Group, which kept everything efficient and in-house.

Daan and his colleagues have trained up local operators who will run all the systems day-to-day. Integral to this largely technical process was ensuring they also understood the design concepts and the way the pre-programmed visual shows need to run and bring various stories to life.

Considerable time was spent on all the many custom aspects and OT Kun is right at the bleeding edge of entertainment technology in China’s burgeoning club sector with its multiple premium global brands and systems.

Working alongside Daan under the Live Legend umbrella were several other highly talented individuals including Stefan Peters who created the concept design and interior aesthetics; Bas Knappers who was associate LD and laser programmer and Thomas de Vries, co-associate LD and programmer.

Rody van Gessel was the chief video engineer and media programmer and he worked closely with content creators Desiree van Giesen and Jim de Brouwer. Joshua Dutrieux produced the soundtracks for the pre-programmed time-coded shows that Daan and the team delivered as part of the visual package.

An awesome crew of freelancers were also involved, working directly for Live Legends.

As the second high-profile Chinese club installation for Live Legends, Daan has appreciated the learning curve and now feels increasingly familiar with the specific nuances and demands of Chinese clubbing culture. He keeps this knowledge in the forefront when ‘telling the story’ through smart experiential design.

“Ultimately the bottom line for any successful nightclub is uniting people and bringing them together through music, visuals and great vibes – and you can apply this general rule in multiple different and imaginative formats wherever you are in the world”.